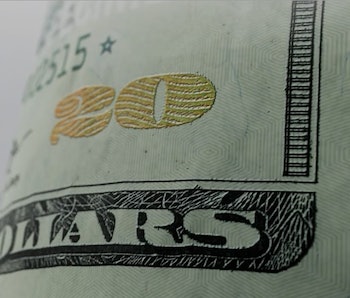 In the age of Photoshop, meme creators, and GIF generators, it may seem like a simple and easy task to change the face on the $20 bill from the slaveholding Andrew Jackson to the Underground Railroad-leading Harriet Tubman. But that redesign, announced Wednesday, will take up to a decade – or longer – before it’s seen in circulation.

A whole host of security measures must be put into place before the bill can go into circulation and be used to buy groceries at the corner store or locked away in a foreign vault as a reserve currency. Beyond the artistic redesign of the $5, $10, and $20 bills, which are already being worked on and are set to debut in 2020 in conjunction with the 100th anniversary of the Nineteenth Amendment, the technology must also be developed to prevent bills from being susceptible to counterfeiting.

“The primary purpose of redesigning currency is for security purposes. The Bureau of Engraving and Printing is working with Treasury, the Federal Reserve and Secret Service to develop robust, unique, denomination specific security features,” Lydia Washington, lead public affairs specialist for the Bureau, tells Inverse in a statement. “Because our currency circulates around the world, it faces international counterfeiting threats that require state-of-the-art security features. The security features and design concepts for the next series of notes will continue to go through refinement and testing until we can be sure that we have a manufacturable note that is easy for the public to authenticate and works seamlessly in commerce.”

Chris Battaglino, owner of the website PaperMoneyGuide.com, explains that the wait for these redesigned notes could be lengthy, as he estimates the bills will start circulating years after the 2020 design announcement. Secretary of the Treasury Jack Lew says he’s instructed the various parties in the process to accelerate the production of the $5 and $20 notes, but consumers wouldn’t likely see the bill in-hand until roughly 2023 at the earliest — or perhaps even over a decade from now.

“The modern security features that they spent so long trying to perfect with the new $100 note and beyond, they’re trying to incorporate all that into the new designs so that, when the designs are released, there’s not an immediate need to then start the process over again,” Battaglino tells Inverse.

The Treasury and Bureau have had to do it before with three changes made to the $20 bill since 1990, which is unprecedented given that the previous redesign was made back in 1929 when all paper currency was refitted to its current, more compact wallet size.

The government seemed to struggle to keep up with counterfeiting technologies coming out in that decade. It wasn’t until the latest redesign in 2003 that the Bureau found a solid answer for the $20 bill, and it most recently printed more than 1.8 billion copies of that note in 2015. Security overhauls included a vertical security thread that glows when placed near ultraviolet light, a micro printed “The United States of America” around the portrait border, a sneaky Jackson portrait watermark that’s only visible under direct light, and color-shifting ink.

In 2013, the government also issued a new $100 note (still adorning Benjamin Franklin) because, given that it’s the highest denomination in print, it is the most widely counterfeited note worldwide. On the other hand, $20 bills are the most counterfeited within the U.S. because they are the standard for ATMs.

The new $100 features a 3D security ribbon that makes the bells look holographic, a feature Battaglino says will likely wind up on the new notes, as well.

At this rate, the Harriet Tubman note would be replacing the longest-used $20 bill since the 1929 edition, which lasted 61 years.

The inclusion of Harriet Tubman is also the first time any of the portraits have been changed since they were established in 1929. However, Jackson will still be featured on the back of the $20 note next to an image of the White House, as Tubman and a cohort of other later-to-be-announced women occupy the front of the bill.

The Secretary of the Treasury ultimately makes the decision of whose portrait appears on U.S. currency, with the only legal stipulation being that it not be someone currently living. However, as Secretary Jack Lew quickly found out, public opinion plays a major role in the choice, especially when you’re looking to get rid of Alexander Hamilton from the $10 bill while he’s currently the star character of the most popular Broadway musical.

Hamilton will, in fact, stay on the $10 note, partly as a reminder that it’s very hard to change entrenched systems of tradition. The $10 bill will also be the first note to undergo a redesign because, in its current design, the department has decided it faces the biggest counterfeit risk.

Once the notes are redesigned, they’ll simply be distributed through the normal systems of the Federal Reserve Bank based on customer demand, meaning $20 bills will circulate faster through the ATMs than $10s will through making change.

Still, it will be into the next decade before that bill comes into circulation, and by then we’ll all have self driving cars, virtual reality headsets, and crash-avoiding drones. With tech like that surrounding us, carrying around paper money will have lost all of what little panache it still retains today.

More like this
Culture
Dec. 3, 2022
If you're lazy but want your home to look good, you'll love these 45 things under $35 on Amazon
By Christina X. Wood
Culture
Dec. 3, 2022
The 75 best cheap gifts that are most added to Amazon wish lists
By Christina X. Wood
Culture
8 hours ago
Why yerba mate may be one of Paraguay’s greatest gifts — or its curse
By Klas Lundstrom and Fredrik Lerneryd
Related Tags
Share: