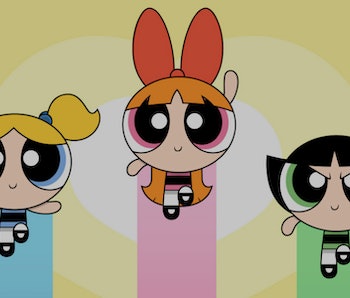 Sugar, spice, and everything nice — with the addition of some Chemical X — add up to the enigmatic protagonists in the original Powerpuff Girl series, which began on Cartoon Network in 1998. The show’s new reboot by Nick Jennings (Adventure Time) and Bob Boyle (Danny Phantom) is, unfortunately, missing several ingredients. While the show isn’t really bad, it does awkwardly try to copy what the original handled so well and it’s finding itself lost.

The reboot’s audience is expected to understand the references, characters, and backstories of the Powerpuff world, and the disconnect that assumption leaves is troubling. Mojo Jojo’s first appearance is in an episode which attempts to liken eating too much candy to drinking too much alcohol, when the girls wake up to a destroyed room and no memories of the previous night.

Buttercup opens up the closet to try to find Bubbles and the villainous green chimp is stuck to the door with make-up and stickers on his helmet. And that’s it. She closes the closet and they continue on with their recollection of the slumber party the night before.

Newcomers to the show will have no idea who this character is and won’t know that he’s a villain trying to take over the world. In fact, none of the series’ villains get an introduction, except for a lackluster one during a pageant show which barely touches on who these people are or what their motivations are. The show feels lazy and flippant.

The show, assumedly, has been marketed towards a young millennial audience of TV fans who once watched the original Powerpuff Girls. The sisters sure don’t feel like they’re five years old anymore, and their ambiguous maturity is off-putting. They’re tweens; they like boy bands, they twerk, they say “literally don’t even,” and they’ve replaced their toys and hotline phone with mobile phones and apps. Who is supposed to enjoy this update, again?

There was a sweet and complex juxtaposition of three little girls who played dress-up going out to kick ass and fight crime which really defined what Powerpuff Girls was and by changing them to texting teens, they’ve lost it.

This reboot is following in the footsteps of Teen Titans Go!, and instead of focusing on the crime-fighting, it’s diving deep into the domestic lives of its heroes. The creators said they did this on purpose, wanting the stories to be more character-driven than plot driven, but we’re not seeing anything that wasn’t done in the original show. The show actually misses opportunities to flesh out its minor characters and falls back on the main characteristics we’re already familiar with: Blossoms is the perfectionist leader, Buttercup is the tough tomboy, and Bubbles is the cute enthusiast. They’re nothing more here.

The original voice actors of Blossom, Bubbles, and Buttercup are different, of course, from their original. There were even feelings of consternation by Tara Strong (Bubbles) and the other actresses when they weren’t asked to rejoin the cast. But most other characters reprised their roles, so watching a rebooted cartoon in which every character but the main characters’ voices are the same is a disorienting. It feels like watching a direct-to-video sequel of a Disney movie which only bothered to employ half of the original cast.

The episodes attempt to be more refined and socially inclusive than the original show’s episodes, telling kids to eat their vegetables. Some fall flat, but I can appreciate the creators giving real-life advice a whirl.

Maybe it’ll find its footing later, and I hope it does because I loved the original, but as of right now, The Powerpuff Girls struggles with landing on the show it wants to be. For now, it’s just a mediocre cartoon. The theme song is pretty cool, though.