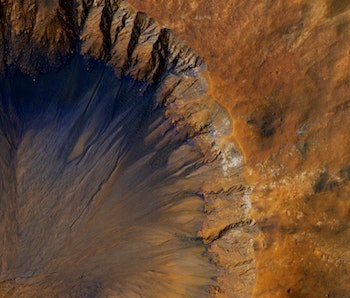 Just because man hasn’t stepped onto any celestial body beyond the Moon doesn’t mean that mankind doesn’t have an interest in understanding the nature of the celestial bodies passing us in the dark. Astrogeology, as the name would suggest, is a field that combines astronomy and geology. With images collected from spacecrafts and rovers, astrogeologists study the terrain and composition of planets, asteroids, and comets. After processing this data, astrogeologists can learn how planets formed, how they changed, and if they’ll be able to sustain life in the future. If this sounds fundamentally academic, it isn’t.

Ken Herkenhoff is a prominent astrogeologist working with the United States Geological Survey, which partners with NASA and other space agencies to aid in rover landing sites selection and spacecraft mission planning. Herkenhoff, previously a research scientist at the Jet Propulsion Laboratory, is also a member of the Curiosity science team and the lead scientist for the Mars Exploration Rover Microscopic Imager project, which seeks to analyze rocks and soils. By analyzing the grains in martian sedimentary rocks, Herkenhoff and his team can determine where on Mars there was water and how the planet’s geology changed over time.

Inverse spoke with Herkenhoff about astrogeology, farming on Mars, and what it’s like to be the first person to see things no one has ever seen before.

What was the catalyst for your interest in astrogeology? Did you always have a sense that you didn’t want the focus of your geological work to be Earth?

When I was a kid I got interested in astronomy from a book — my great-great grandmother gave me an astronomy book for Christmas one year and that got me started in my interest in the planets. And as I was growing up in the ‘60s and ‘70s the spacecraft exploration of the planets began, including the moon landings, and I just found all of that fascinating and decided that was what I wanted to do. It took me a while to figure that out — I thought I wanted to be an astronomer and discovered at some point, probably in high school, that astronomers don’t really care much about the planets, it was really the geologists that were doing the things I was interested in. So that’s how I ended up getting a degree in geology, rather than astronomy. I’ve been interested in planets since I was a child, and I’ve been lucky enough to be able to pursue a career that allowed me to do that.

How do you study the geology of a planet without being there?

We study images both from the rovers and from spacecrafts — and even going back farther, initially there were fly-bys. But yes, it’s pictures that we’re using to understand the geology and therefore the history of the surface. We use terrestrial geologic experience to try and understand what we’re seeing. If we see things that are similar to features we see on Earth, that helps us figure out what’s going on.

How do you really dive into a photo and determine what the topography of a planet is like?

It depends on the photo but, again, you look for features that are familiar — either experience from Earth, or other pictures we have from Mars. The goal is basically to figure out how the surface got to be the way it is — it’s called geomorphology. It’s the same kind of process used on Earth for a terrestrial field geologist walking around out in the field looking at rocks up close, and their relationships with each other. We use the same processes as the rovers that explore Mars to try to understand the history of those rocks too.

How did you become involved with the Mars Pathfinder mission?

Pathfinder, I was just lucky that project scientist Matt Golombek was looking for somebody to be the liaison between the imager team, which is led out of the University of Arizona, and the JPL Project. He asked me if I wanted to get involved, and I said yes — that’s when I discovered how fun it is to run a rover on Mars.

And that led to being the lead scientist with the Mars Exploration Rover Microscopic Imager?

Yes, basically my experience there was then desirable to Steve Squyres and his team, who were putting together a proposal that I helped a write a little bit back in the ‘90s. The proposal was to send a bigger, better rover — which ended up being two, after NASA asked JPL if they could send two to reduce the risk.

What is the main purpose of sending rovers to Mars?

Looking for signs of ancient water is certainly a big deal. As far as we know, you need water for life, to evolve, and thrive. There are very bizarre places on Earth where life thrives, so there is a wide range of conditions — but they all involve water. The focus has been looking for water and water related deposits on Mars, like sandstones, and mudstones that we’ve found for example, in a crater that indicated that there were lake bed sediments. So there was a lake there, and therefore, a habitable environment. Finding water and water related minerals is key.

Do you have a sense if we’ll ever be able to grow anything on Mars — will colonists on Mars be able to farm?

By looking at collected images, can you tell how much of the geology of Mars has changed over time?

It’s changed a lot. Images, particularly orbital images, show areas that were very wet — rivers flowing, some people even believe there was a great big ocean covering most of the northern part of Mars. But then, the climate changed very drastically to the cold and dry climate we have now. And all that water is probably filtered down into ground ice deposits, all over Mars. So there’s still water there, but it’s underground and not liquid anymore — well, not liquid at the surface.

Do you have a favorite part about your job?

Wow — I love the rover operations. You never know what you’re going to see. Often we’re driving to a new place — just the thrill of exploration is what I really enjoy.

Can you describe the environment in the room when you come across something like a massive sand dune or ripples on Mars?

I should say, we’re not all together in the same room anymore — we used to be, in the first part of these missions. But there would be gasps of astonishment and ‘Look at that!’ and pointing at the screen; throwing ideas around. Yeah, that was really exciting. Now that we’re doing this more remotely, what we’re sharing is a phone line and still gasp in amazement. It’s less frequent because you know, we’re all spread apart — but yes, I love coming in at the morning and seeing what the latest pictures look like. I love seeing things that nobody else has seen before.

When do you think we’ll see a geologist walking around on Mars?

Boy, I would love to see somebody walking on Mars in my lifetime. We’ll see if that actually happens — it’s going to be expensive, and therefore it’s going to take some political will to make it happen. Personally, I think it’s going to require international collaboration — it’s just too big and expensive a project for any one country, even the United States, to try to do alone. There have been discussions of that over the years, so I’m hoping something like that will occur. I think it would be a great thing to do for humankind — an international mission would bring people together. But I’m not holding my breath right now. There’s been talk of sending people there within the next decade and that would be great — but I’m not sure there’s going to be enough funding to make that happen.