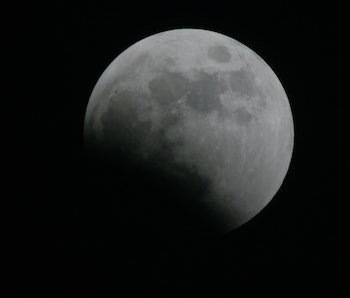 Moon Express wants to live up to its name. They’re not being subtle about it — they’re a private company that wants to go to the moon and open it up to human commerce, bridging the gap between the Earth and what CEO and founder Bob Richards calls the “eighth continent.”

Richards gave essentially an hour-long sales pitch aduring a SETI talk earlier this month, speaking about the future of commercial space exploration and where MoonEx wants to be in a year (spoilers: it’s the moon).

Richards said he hopes they can fly their first mission in 2017, but there’s a lot that has to happen before MoonEx gets off the ground. In the long run, the company has hugely ambitious goals: they want to be the first private company to land on the moon, and they want to create trade route between it and Earth, researching, mining, and extracting our orbital friend’s resources for economic and scientific gain.

That’s all a long way off, however. Richards said he doesn’t expect “sample return missions” (i.e., bringing stuff back) until 2020, and the company has to get to the moon first, something many are skeptical about.

“Going for a moonshot, there’s a credibility gap, cause it’s never been done before,” Richards said. “It’s very important for our partners at NASA to see that the private sector can actually do it, so our first goal was just to get there, to not get too complicated… touching the moon would be a good thing, touching it softly would be even better.”

They unveiled their concept for a “mini-lander” way back in 2013, but hope to get one on top of a rocket within the next 12 months.

“My confidence is really high that we’ll be the first private sector company to get to the moon, it’s just a question of how many pieces we get there in,” he said.

The initial plan was to buy rockets from SpaceX, but during development MoonEx found out you can basically buy a rocket online from Rocketlab, a U.S. based company that gives private corporations a one-stop-shop to launch micro-satellites into the air. Richards said the price of a full rocket is about five million dollars. He said MoonEx has raised about $30 million in investment funding so far, and hopes to double that number this year.

Besides the myriad of logistical problems, MoonEx might also run into legal issues. Several companies have expressed interest in mining moon ice for water to make rocket fuel, but the moon’s resources are in a sort of grey area when it comes to private enterprise. Richards says he’s on his way to Vienna and The Hague to meet with world leaders to discuss the issue, but for now, MoonEx is in the clear. According to the Space Resource Exploration and Utilization Act of 2015, taking objects from space is “finders keepers,” Richards said, comparing it to fishing in international waters.

MoonEx has lots of plans, tests, and fundraising ahead of them — while they certainly seem to be more realistic than the at best deeply flawed, at worst complete scam “Mars One” experiment, we’ve been fooled before. But NASA believes in them — enough to give them a $10 million grant, and they’re in the running for the Google Lunar X prize, and it’s becoming ever more clear that the future of spaceflight may lie in the private sector, not the public one.

You can watch Richard’s full speech below (it starts about 7:20 into this video).