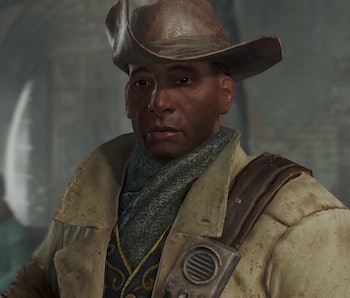 In Fallout 4, the world hates you. Nearly everyone and everything is out to murder you as efficiently as possible. In the harsh environs of the Commonwealth, allies are few and far between, and Preston Garvey is one of the first folks willing to be your pal. Of course, first you have to wade through an army of Raiders and eviscerate a Deathclaw with a sweet-ass mini gun, but you didn’t start playing Bethesda’s masterwork to go around making nice with people.

When it comes to establishing a home in the wasteland, to setting down real roots in an inhospitable world, Preston Garvey is your earliest and most accessible pal. Yet, for all the support that Preston provides early on in the game, gamers cannot stop mocking the poor guy.

When you meet him, Preston Garvey is the failed leader of a motley crew of wasteland wanderers. He grew up an idealist who joined the Commonwealth’s police force, the Minutemen, to help effect real change in a broken world. Unfortunately, Preston isn’t a leader, so he’s all but powerless to stop the organization from growing increasingly ineffective. That incompetence comes to a head when the brunt of the Minutemen’s fighting force is obliterated in a town called Quincy.

It’s Preston who emerges from the wreckage as the sole surviving loyal Minuteman leading a group of twenty survivors. Unfortunately, wherever they run, they’re beset by attacks; the original twenty is whittled down to a mere five when the Sole Survivor wanders across his path.

Preston is a man who’s watched his idealism get crushed under the weight of a merciless world. He’s not a great fighter, he’s not a great leader. He’s a dreamer.

Why Do People Hate Him?

About six seconds after you meet him, Preston Garvey decides that he’s had enough of this leadership bullshit, so he hands the reigns over to you, the Sole Survivor. In general, gamers have no problem with this development, since being in charge rules and the move jives with Preston’s character. (Again, the man is not a leader.) As soon as you complete a couple of routine go-here-murder-this missions, though, every time you get within arm’s reach of Preston Garvey, he gives you a new mission without asking permission. It’s called a radiant quest, and people really hate them.

A radiant quest is essentially just a randomly generated mission that requires the player to go to some random place and either kill someone or rescue someone or kill a bunch of people, then rescue someone. They generate ad infinitum, they’re timed, and they show up in your quest log whether you want them there or not.

Unfortunately, the game issues these quests through Preston Garvey — using some riff on his signature catchphrase, “Another settlement needs your help. I’ll mark it on your map.” — with no regard to where you’ve been in the past or what you’ve got on your plate (you know, like finding your kid).

The issue is actually such a source of aggravation for gamers that one of the more popular PC mods for the game simply gets Preston to shut the fuck up.

In all fairness, though, the hatred has spawned some really excellent memes mocking the Commonwealth’s most earnest and oblivious citizen as he ventures anywhere and everywhere to make sure that you’re aware of all of your obligations.

And Why Should People Spare His Feelings?

Again, you’d be forgiven for giggling at the myriad cheap shots levied at the poor Minuteman. They’re funny.

But that doesn’t mean the character himself deserves all the hate he gets. The man is just trying to use the resources at his disposal to help make the world a better place. And who’s a better resource than the walking army that is the Sole Survivor? When you do choose to take him into the field as a companion, he’s both deadly and durable and he tends to keep his mouth shut while you’re roaming around (which is a big deal). Preston is a good guy, who’s just happy to take orders and get important information to the right people.

And here’s the thing about that information — you can just choose to ignore those radiant quests. Sure, they’ll eventually expire and you’ll get a message noting that you failed some JV step-and-fetch. Boo hoo. Fallout 4 is a game of failed missions; as you play, you’re forced to make choices that instantly fail missions, and the game isn’t shy about pointing them out. Compared to failing entire storylines just because I wouldn’t shoot some synths (synths are people, too!), failing some mission you hardly remember getting in the first place is but a small sting.

But, hey, if you do need some extra XP for wiping some Raiders, Ghouls, and Super Mutants off the map, there it is, a Preston Garvey quest ready and waiting to reward you for doing the things you’d be doing anyway. Try not to think of it as a cluttered Quest List — why the hell would you ever want to run out of quests, anyway? — think of it as an opportunity to taken or to be ignored. Nothing more and nothing less.

As for Preston Garvey, he’s stalwartly collecting the information you need to make the Commonwealth just a slightly brighter place. He’s one of the good ones. If he’s a little insistent, it’s just because he cares.