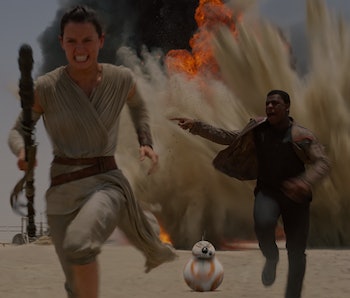 Lucasfilm kept the set of Star Wars: The Force Awakens very secretive during production, but now that the film has hit home video, secrets from Pinewood are flowing like water on Naboo.

For a long time, nobody thought that Episode VII would actually happen; George Lucas always waved off the idea after the experience he had on the Prequels. It seemed like a fan pipe dream that didn’t show much promise of ever lifting off the sand dunes of imagination. But 2100 VFX shots coming from 8 VFX facilities later, we know that Episode VII did happen, and was met with astounding success and has fans clamoring for more.

Pat Tubach spoke a little bit about the role of visual effects in film, and how the role of a shop like ILM differs from scene to scene, shot to shot. The biggest consistency, though, is that art and design always has a place in the VFX pipeline.

So how did the art, visual effects and sound all come together as The Force Awakens went from “never going to happen” to “in theaters December 18th?”

A major scene that came up in the discussion about sound was the sequence in which Finn finds the TIE fighter just before it sinks into the sand. Like the scene where C3PO and R2 first find themselves on Tattooine in A New Hope, there’s no score, so the sound effects have a chance to make a real impact. Bishop asked Wood how they made that sound of the TIE fighter sinking into the sand.

““There’s dog food in a can being pulled out, there’s a long, low-frequency burp happening, like it’s being eaten,” said Wood. “Basically we… kind of treated it like it was being digested so we put some digestive sounds in there. And then we have that nice rolling sort of thunder effect that happens.”

Wood also spoke of the importance of remaining true to the original films, and in large part, staying true meant going back to the recordings of Ben Burtt, the sound designer who worked on the first Star Wars Films.

Sounds that come from the TIE fighters and the Falcon are legendary, and they needed to be right. However, Wood quickly found that they didn’t have a TIE fighter sound in the library that was actually long enough for the sequence they had in the Falcon chase scene. Much of what existed in the library were pass-bys, and so Wood had to create a new recording using some of the original elements of the TIE fighter sound.

Those elements? An elephant sound and the sound of cars driving on wet pavement.

“We don’t want to change those things because sound has such an easy sort of emotional and subliminal way to put you back in a universe again,” said Wood. “We have this kind of backdoor into your mind to ground you back in the universe again.”

Jakku and the Ship Graveyard

Jakku is a pivotal location for The Force Awakens. As you can imagine, a lot of time and effort was dedicated to getting things like the ships in the sand, the Super Star Destroyer and the Millennium Falcon just right.

Clyne talks about the ships in the graveyard that stood in the shadows of the Super Star Destroyer. There was a lot of creative thinking and idea-slinging around how the ships got there and how that would influence the way they existed on Jakku.

“We had an idea early on where they had these tug boats that would drag big derelict pieces from space onto the planet and just kind of ram them into the planet,” said Clyne.

The idea, then, was that youd have these ships that just stood rooted where they’d landed in massive craters.

Ideas like these are a testament to an important part of the creative process, which Clyne describes as, “Throwing out all of these crazy ideas and seeing what sticks.”

And the Millennium Falcon chase scene where Rey takes the Falcon through the Super Star Destroyer?

“As far as design goes, we really riffed off of kind of what you see in the Death Star,” said Tubach. “If you think about that Death Star chase in Return of the Jedi where they’re going through, they really love those little slots that you can just barely fit a Millennium Falcon through — perfect for flying through, so we put a lot of those in.

Reintroducing the iconic hunk of junk was a huge undertaking. As one of the most important characters in Star Wars films, it had to be done right.

“It took probably about a year of development to make the Falcon again,” said Tubach.

In fact, the work that ILM did for the Falcon influenced the way that they do pretty much everything.

“Knowing that we were building assets that we wanted to live for a long time and travel through multiple movies and be able to use in multiple ways,” said Tubach. “We started looking at our material library…and we sort of, with the Falcon in mind, kind of modernized everything with a new shader where we took a lot of new photographic reference and then we painstakingly matched all that photographic reference in CG.”

It was important that they develop what Tubach called a “ground truth” for the Millennium Falcon so that they could render it predictably in different conditions. This had a lot to do with things like dirt and grime that we typically see on Star Wars ships and objects. This approach was also helpful in making sure BB-8 looked correct and of-the-world in every shot.

Speaking of BB-8, designing the droid was a vital part of creating a new story in the same Star Wars universe. It’s well-known by now that he started as a sketch on a post-it note from director J.J. Abrams. Clyne discussed BB-8’s many iterations. The creative team went through a lot of ideas — treads, ropes, even multiple legs. In the end, though, a lot of it came back to that original sketch.

“It’s part of the process, and it happens in visual effects too, where we go as far as we can possibly take it and then we look at it and assess and eventually it kind of comes back around to the simplest first point that we took at it,” said Clyne.

As far as BB-8’s sound? That went through a number of iterations, too. Ideas were tossed around about only using B’s and eighth notes to create BB-8’s voice, but eventually the team landed on oscillated tones controlled through an iOS device. Though the original ambition was to have Abrams controlling BB-8 during the scene so that actors had a voice to act to, that proved to be a tad too difficult to coordinate.

Instead, Abrams enlisted the help of comedian friend Ben Schwartz to come up with lines, which were cut in with the oscillated tones for rhythm and timing. The oscillated tones were fed through a talk box and then through Bill Hader’s embouchure (that is, the shape of his mouth without him actually speaking) to give it a touch more realism.

The result is the BB-8 we see and hear in the film.

Back when the original films were made, lightsaber technique was much less advanced. Filmmakers and actors used wooden sticks and the distinctive glow was added in post.

Things have changed, though, and for The Force Awakens, actors used LED tubes that had their own glow, allowing them to be used as a lighting element. Of course, there was still VFX work done in post, but being able to use tools that more closely resembled lightsabers than wooden sticks was an advantage for those working in VFX as well as the actors.

In addition to the new practical sabers, though, a new saber was added to the mix with Kylo Ren. With that saber came a new sound.

“We wanted it to be an unfinished design,” said Wood. “It was not done the way a normal Jedi saber was made…like it could blow up in your hand, basically, is what JJ wanted it to be like.” Much of that sound comes from the noises of electrical malfunctions, an ominous low-frequency tone and, believe it or not, the purring of the sound designer’s cat, Porkchop.

It’s clear from the panel that Tubach, Wood and Clyne are all fans. And so, when one fan asked what the coolest part of working on a Star Wars film was for them, personally, Wood summed it up pretty nicely.

“I think mine’s not really sound-related,” said Wood. “I think it was going to Pinewood and asking if i could see the other sets just for research purposes and going onto the Falcon set, which was a dream…the hallways are there, the little chessboard area, Chewie’s bed, and then the ramp and the other hallway going into the cockpit. It’s all right there.”