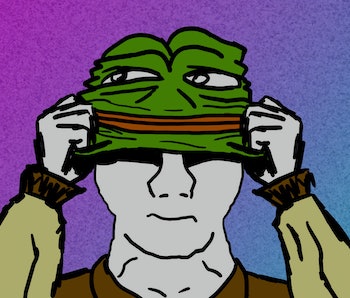 “Memes” are partially, if not largely, defined by their ephemerality. They can be as simple as an phrase or an animated picture file, but become bigger than life overnight, rippling through your social media timelines for an intensive period before flickering out (see: candles in the wind) or being ritually sacrificed.

But even “Just an Internet thing”s of the most indescribable and transient order must be committed to history’s annals, officially, however unworthy they might seem. Memes are like minor earthquakes destabilizing social media and its trend bars for a hot moment. And just like the XYZ Affair or the “Christmas Truce” in your high school history textbooks, they must be logged. Enter the hashtag seismologists at Know Your Meme or Urban Dictionary.

Once, we read Britannica or Howard Zinn to understand the past, or reappraise ourselves of forgotten details. Now we surf straight for Wikipedia or Yahoo! Answers for the important intel.

The particular difficulty of writing about memes is that they’re almost ineffable. They are highly visual and immediate — more than the sum of their parts, unparsable, post-verbal –– blah. Usually there is heavy background reading to do before “getting” them: Their meaning is contingent on a long string of nebulous cultural reference points. For example:

In most instances, normal English only communicates the cold skeleton of these constructs. Whatever moved us about them originally is rendered inaccessible by deathly literal, even stentorian language. Even looking at the original articles — after a bit of time has elapsed — is a mystifying experience. A few months later, they seem ancient and obsolete.

This is all to say: have you, reader, ever tiptoed through the meme graveyard? Here are some absurd excerpts from meme post-mortems, culled from several of the primary databases that catalogue them.

“On February 11th, 2016, after the initial preview of The Life of Pablo, Twitter user @wherebaeat tweeted the lyric combined with two photographs: one of Kim Kardashian holding a rifle, and another of Kris Jenner holding a handgun. The tweet received 35 retweets and 27 favorites.”

It’s inevitable in these descriptions that the writer traces the rise of a meme. Of course, the narratives will always be woefully incomplete and even misleading, owing to the impossibility of examining all social media and blogging platforms thoroughly. But one can try. It’s essential to log the name of the user (ones with “bae” in their name are great, especially, to contextualize the meme in the larger viral environment of the time) and the tweet/retweet counts. Let’s be diligent, ‘net historians.

“The 2012 Walt Disney Pictures animated movie Wreck-It Ralph features a Graffiti of ‘All Your Base Are Belong To Us’ on the wall of the Game Central Station at 7:30 seconds into the movie.”

From this Wikipedia summary which closes with this sentence, one infers that Wreck-It Ralph “killed” the “All Your Base” meme. And so history will remember it.

Doge uses two-word phrases in which the first word is almost always one of five modifiers (“so”, “such”, “many”, “much”, and “very”), and the departure from correct English is to use the modifier with a word that it cannot properly modify. For example, “Much respect. So noble.” uses the doge modifiers but is not “proper” doge because the modifiers are used in a formally correct fashion; the doge version would be “Much noble, so respect.” In addition to these phrases, a doge utterance often ends with a single word, most often “wow” but with “amaze” and “excite” also being used.”

The “Doge” phenomenon was always particularly bewildering, and the Wikipedia entry does a good job of making it seem like something much worse.

Important for meme-storians to remember that the white rapper in the widely recaptioned “Scumbag Steve photo — Blake Boston aka “Weezy B” — publicly stood in solidarity with the drug community that rebranded his photo hundreds of times. A #random picture is worth a thousand upvotes.

“During the process of its viral spread, an exploitable version was uploaded onto MemeGenerator, spawning dozens of derivative images based on the following formulaic sentence: “(X, subject noun), [WH]Y [YO]U NO (Y, verb)?.”

Behind every meme — and living thing — there is a sinister string of code.

“It means that you are going to go over to your partners house and fuck with Netflix in the background.”

I always disliked the flowery over-complexity of the writings of the French Continental philosophers; it’s always good to read theoreticians like “Octopimpslap” who bring things straight to the point.

“On the following day, Urban Dictionary user Anonymous8223 submitted an entry for ‘tfw no gf,’ defining it as a ‘statement of sorrow.’

TFW u feel feels fantasizing about the life of an anonymous user mentioned in passing in a meme history [sad frog face].

“In the 1870s, photographer Harry Pointer took black-and-white photographs or cats posed in a variety of different situations, adding humorous text referencing the context of the photo.

It seems 4chan users really steeped themselves in history while plotting the eventual LOLcat takeover. Gotta go now — finishing a chapter in my book tracing Condescending Wonka back to cave paintings.

Please share, so someday, this article will be regarded as its own viral moment — one that the poets of Reddit will sing songs about.