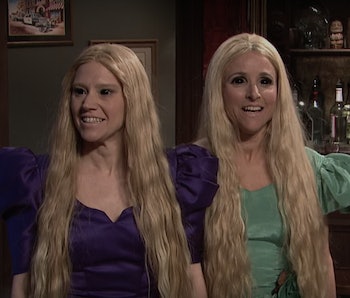 Saturday Night Live is no stranger to offbeat comedy, but last night’s Match.com Meet-n-Match skit took weird to a level unreached in a long time. It was bizarre, dark, and wonderfully strange.

Enter Julia Louis-Dreyfus and Kate McKinnon wearing frazzled, blonde Rapunzel wigs, blacked-out contact lenses, and dresses that look like wardrobe from a low-budget Enchanted spin-off. If that didn’t tip off the audience to their otherworldly origins, the green light, fog machine, and deep-voiced declaration that the duo “must find men for dating” surely did. And the screeches, of course.

The Match.com skit aired during that special time near the end of the show, when the sketches can be hit or miss but are often marked with a surreal quality. This isn’t the first time SNL has spoofed dating sites (the “Settl” sketch about finding mediocre partners and the Match.com bit about Martha Stewart on the hunt for hook-ups come to mind).

But maybe alien humor is the way of the future in this new age of space exploration.

All the two aliens want are men to mate with — to save their dying race. It’s a common enough alien trope to accept at face value, and there are plenty of targets in a room full of men familiar with the online dating scene. The first two suspects are wearing fedoras, because what else would desperate men at match.com mixers wear?

And then there’s the ending, which we should have seen coming: