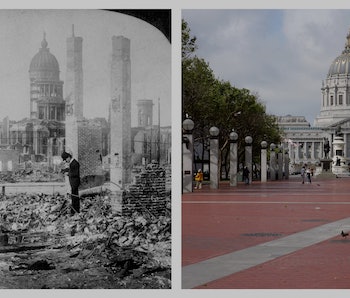 One hundred and ten years ago today, a magnitude-7.8 earthquake shook San Francisco. The quake and fires it ignited destroyed 80 percent of the city, left 3,000 dead, and rendered a significant percentage of Northern Californians homeless. It also dealt a huge blow to the American scientific establishment. The California Academy of Sciences, a massive collection, suffered heavy losses: 100,000 specimens in the herbarium alone were destroy. Some of the most important plants in the collection, however, were saved thanks to the bravery of Alice Eastwood, the curator of the botany department, who risked her life to save plants from fire.

After awaking to the quake shortly after 5:00 a.m., Eastwood assessed the damage to her neighborhood, which was minimal at that point, and set off for work as usual, according to an account published in the Proceedings of the California Academy of Sciences. Seeing that the downtown was in flames, she did not turn back but pushed on to assess the damage to the museum. She reached her workplace before the flames did, but fire was raging up nearby streets.

When she made it to the academy, she found that the marble staircase leading to the collections was collapsing, so she used the iron railing to climb to the sixth floor herbarium. Finding her workplace in disarray, Eastwood began filling her work apron with specimens, then fashioned a cord from ropes that reached the first floor and climbed back down the railings. Using the cord, Eastwood’s friend Robert Porter lowered some 1,497 specimens to where Eastwood was organizing them on the ground.

Eastwood initially stored the specimens in her living quarters, but as the fires spread, engulfing the city, she kept moving the collection. Even after most of her personal belongings went up in a blaze, she remained focused on the specimens.

“I do not feel the loss to be mine but it is a great loss to the scientific world and an irreparable loss to California,” Eastwood told Science magazine in May, 1906. “My own destroyed work I do not lament, for it was a joy to me while I did it, and I can still have the same joy in starting it again. The kindness of my friends has been great. I feel how very fortunate I am; not at all like an unfortunate who has lost all her personal possessions and home.”

That anything at all was saved was due especially to Miss Eastwood, then as now the Academy’s curator of botany, who lost all of her own possessions while attempting to save those of the Academy… It was justice in the most poetic sense that more than half a century after the Academy had voted to admit women to its activities, the book of minutes containing the record of that action, along with other documents and specimens of inestimable value, should have been saved through the energy and resourcefulness of a woman curator.

The director of the museum at the time of the disaster, Leverett Mills Loomis, also arrived at work on the morning of the quake. He managed to rescue two bird specimens — both Guadalupe storm petrels — and two bird books. Some museum records and insect specimens were rescued by other staff.

The museum did not reopen until 1916. When it did, Eastwood’s specimens were the nucleus of the new herbarium, along with donated collections and specimens that had been out on loan during the fire, about 3,000 plants collected by Alban Stewart during excursions to the Galapagos Islands in 1905 and 1906. By 1918, the botanical collections had grown to more than 50,000 specimens under Eastwood’s leadership. She retired from her post in 1949, on her 90th birthday.

Since the 1906 disaster, the California Academy of Sciences has become an international leader not only in botany but, perhaps unsurprisingly, in seismology. Multiple exhibits over the years have focused on teaching visitors about earthquake science and disaster preparedness. The current one entertains with a “shake house” decorated in Victorian style that simulates the trembling generated by the 1906 quake and the later 6.9-magnitude Loma Prieta earthquake in 1989.

In 2008, the academy opened a brand new, state-of-art building to replace 12 aging and earthquake-damaged structures. A spokesperson assured Inverse by email that the museum’s 46 million scientific specimens are as safe from future quakes as could be reasonably expected. The collections are housed in rooms of reinforced concrete, with rails preventing the mobile storage cabinets from tipping over in a tremblor. Specimens stored in alcohol are kept on shelves with bars that prevent them from rattling to the floor and breaking. The fire protection systems in the collection rooms are among the most technically sophisticated on the planet.