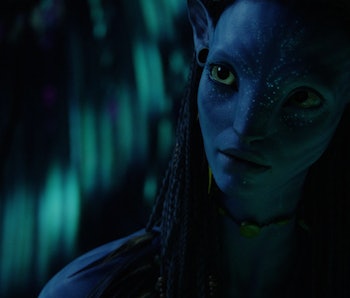 Audiences got a pleasant shock at the end of Fox’s CinemaCon showcase when James Cameron stepped on-stage to announce four more Avatar sequels are in the works; and one will be released every year beginning in 2018.

Cameron called the undertaking “a truly massive cinematic process.” On that note, he’s entirely correct, as his process for filming the impending Avatar sequels has been pretty unique in the history of cinema. In spite of the recent news that Avatar 2 had been pushed back to avoid the box office (ahem) force of Star Wars: Episode VIII, James Cameron has never wavered in his devotion to the long gestating project.

The ambitious set of sequels to 2009’s well-received mega-blockbuster is being written by a team of four screenwriters, each of whom are theoretically working on a standalone story set in the Avatar universe. Cameron is overseeing the creative process and promises that while each film will function independently, the whole series will amount to a “truly epic saga.”

Cameron also used the podium to sound off on Sean Parker’s controversial Screening Room, saying, “I think it’s absolutely essential for movies to be offered exclusively in theaters on their their initial release. So boom.”

Given Cameron’s historically stellar performance at the box office, it’s highly doubtful he’ll have any trouble drawing crowds when Avatar 2 hits theaters in Christmas of 2018.

More like this
Gaming
6.23.2022 4:04 PM
15 best Wordle starting words, according to math and science
By Robin Bea
Entertainment
12 hours ago
25 years ago, Nic Cage made his most explosive sci-fi movie ever — it was almost even better
By Jake Kleinman
Entertainment
11 hours ago
Marvel leak reveals a groundbreaking new god in Black Panther 2
By Dais Johnston
Share: