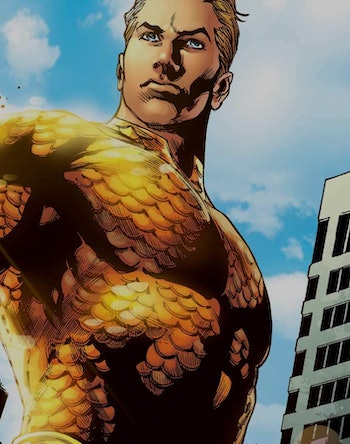 There’s a new Aquaman movie on the horizon. Okay, the sort of distant horizon: Summer 2018. Naturally, details are scant since it’s still quite far away.

We know that Jason Momoa (of Game of Thrones fame) will be playing Aquaman and that James Wan is directing, but as far as plot, we’re still very much in the dark. There have been rumors, however, that Aquaman will address pollution in his first solo film. Even Momoa himself confirmed that his costume was inspired by all the filth currently in our oceans. In an interview, Momoa said:

Well, there might be some bit of orange and green. A bit of respect to prior work, but I think he is meaner now and upset – look at what has been done to our oceans. That’s his world that has been polluted.

We can take a few stabs at speculating about how the “Reluctant Ruler of Atlantis” might handle some IRL problems in our oceans. With abilities like super strength, durability, superhuman swimming skills, the ability to control marine life and the ability to breathe underwater, how might Aquaman tackle coral bleaching, overfishing and acidification?

Coral bleaching occurs when a change in water condition stresses coral into expelling the necessary and symbiotic algae that live within its tissues. Algae is a major food source for coral, and without it, the coral turns white and becomes more susceptible to disease.

So, theoretically, how might Aquaman be able to lend a helping trident? We’ve got a couple of possibilities: Either make the coral hold on tight to its algae until water conditions stabilize with his ability to control marine life or find a way to cool the water down.

Now, there are some accounts of Aquaman being able to shoot freezing water, which would make cooling down the water a breeze. However, shooting ice is not among DC’s listed abilities, so let’s assume that Aquaman is limited to the abilities listed above.

In that case, he’d likely have to enlist the help of OG Tempest/Garth/Aqualad, who has the ability to control water temperature. Cool down the water and you mostly take care of the problem. All in a day’s work for Atlanteans.

Overfishing is exactly what it sounds like: By National Geographic’s definition, “Ocean overfishing is simply the taking of wildlife from the sea at rates too high for fished species to replace themselves.” A lot of the problem has to do with illegal fishing.

What can Aquaman do about it? Again, there are a couple of possibilities here.

Aquaman’s got the ability to communicate(/control or at least instill ‘thoughts’ in) marine life. So, in the event of overfishing, it’s certainly plausible that Aquaman could just pull some Fish Whisperer magic and steer the schools away from dangerous territory.

Alternatively, Aquaman’s got super strength and durability. Perhaps he could just, er, “convince” those behind the dastardly overfishing practices to kindly heed their quotas. Seeing as he’s definitely got the ability to wreak havoc on boats, docks, harbors and the like, we think his persuasion tactics would probably be pretty effective when push comes to shove.

Acidification is a harder problem to fix and it’s mostly our fault.

The term refers to the changing chemistry of ocean water as it absorbs CO2. According to the National Oceanic and Atmospheric Administration (NOAA), “When carbon dioxide (CO2) is absorbed by seawater, chemical reactions occur that reduce seawater pH, carbonate ion concentration, and saturation states of biologically important calcium carbonate minerals.”

This imbalance affects marine life, from coral to shellfish, and because our awareness of the problem is relatively recent, we still don’t know the long-term effects that acidification might have on our oceans. It’s no secret that our love for fossil fuels have upped CO2 emissions pretty dramatically. We’re not solely to blame for the problem, but scientists estimate that’s it’s at least half our fault.

Because this is a man-made problem that isn’t rooted in but rather affects the ocean, we’re not sure there’s much Aquaman can do about it. The sea’s an innocent bystander here, so unless he uncovers a way to change the chemistry in the entire ocean or somehow limit the ocean’s ability to absorb CO2, we’re pretty much on our own. Time to jump on the Tesla Model 3 bandwagon.