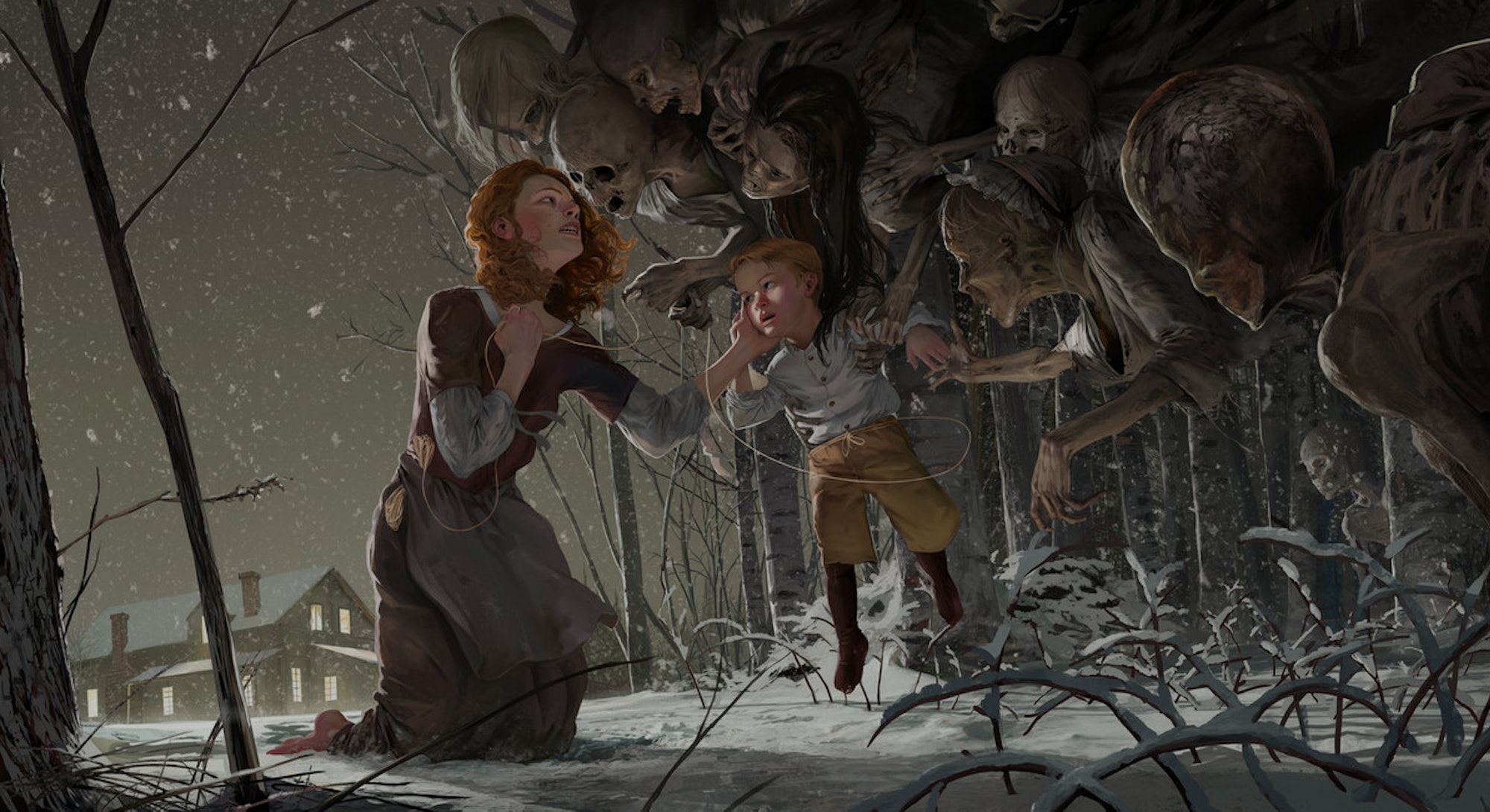 Fantasy artist Michael MacRae’s nightmares are embedded in the natural world. His colors are muted and soft, and his ghosts appear emotional and delicate. It goes without saying that he’s a star on Reddit.

MacRae, a Vancouver native, is a freelance artist who says that in junior high “My teacher at the time got me in the mindset of actually trying to improve and gave me goals to reach. It was a billion years ago but I still like to credit him for getting me on track. I might have been 12 or something at the time.”

MacRae works in strictly digital mediums, though he sketches ideas out on paper in between projects.

Your piece “Afternoon Rituals” is full of this tension that I want to know more about. What did you envision happening between these two characters?

Just about every picture I make is set within one of three universes, or I guess “head worlds” as I heard someone call it. There’s one for sci-fi, and one for fantasy-esque things and one for horror themed pictures. “Afternoon Rituals” is part of that genre and centers around two characters that, frankly, I have no idea why they are together.

As time progresses, ideas tend to change, and come and go, and the reason these two are prancing about the arctic tundra together has long since gone from my mind. But, I still like the idea of a creepy zombie-man hanging out with a seemingly normal looking young woman.

She was sitting down by the ocean washing up (in the freezing cold) while the zombie-chap comes out of the water where he’d set a trap for some sort of arctic fish, presumably for dinner. For the most part he ignores her while going about his mysterious ways, but in this instance they both catch each other’s gaze in a singular, strange moment of understanding. What that understanding is, is left up to interpretation. He has a lack of concern for privacy, that’s obvious.

So regarding “That Was the Most Fun I’ve Ever Had” … I’m assuming the characters just killed a bunch of people — am I right?

Yes, they were just in a fight with some mysterious assailants that beset upon them. My goal with this picture was to show the juxtaposition of a young girl who’s been all beat up in a brutal, deadly fight, and she’s oddly OK with it. You would expect her to be sore, maybe a little displeased with some visible wounds but no, she’s fine. The thing about her is that she can take it, not only that, she can look back on it and laugh. I think this picture is a good example of telling a story with minimal elements which is one of my main goals. It’s pretty simple, but there are a lot of implications you can draw from it.

You use dark, nature imagery a lot, in “The Mothers,” “Heed the Creatures,” and “They Would Burn.” What about dark forests is so fascinating to you? Are you interested in witches?

Dark forests are creepy! I want people to come away from my pictures with a sense of atmosphere, just the feeling that comes along with the image. What better environment to portray this than with a dark, dense, damp forest?

Forests are full of life and full of things scurrying about just beyond your vision, which is fun to think about. A huge point of inspiration for me has always been the movie The Blair Witch Project. As far as I can tell, it’s the quintessential film that relies on the viewer’s imagination to create the horror, and personally it sent my imagination absolutely reeling with connotations.

All you see in that movie are some rocks, some teeth, and hand prints coupled with the occasional unexplained noise, but that is enough context for you to figure out the rest. The Blair Witch alone made me fascinated with the idea of witches. The hows and whys are completely left out and that makes it creepy, so I like to try and impart a bit of that in my work wherever I can.

“Wolf” is so striking. It’s a great monster design. I know it came to you in a dream, but what about it do you find unsettling? Do you imagine that’s a living being under that armor?

Wolf was a lot more spooky in the dream than it turned out on paper, as many things are. I don’t know if there’s anything inside of it, which is part of the point, though personally I don’t think there is.

It isn’t necessarily meant to be unsettling, more so mysterious, as it’s clearly not human and certain parts of it like its hands and feet are made entirely of wood. That makes no sense from a biological perspective. It’s part of a series of similar critters I’d like to make and implement into a narrative.

I wish I had more to say about it but it was really just a neat idea that came to me at night and that I whittled out over a day or so. I don’t think of myself as much of a designer so it was a nice exercise in bringing different elements together to create a cohesive design.

Are you into sci-fi and fantasy imagery in contemporary media? What are your favorite images in genre TV or film right now?

I don’t watch much TV apart from Game of Thrones and the occasional “what’s up with Rick and the gang?” check-in with The Walking Dead. [TV is] just too much of a time investment.

I do watch a lot of films and take a lot of inspiration from them in various ways. I love sci-fi from an escapist point of view, but few of them have much of an impact on me in terms of inspiration. Same goes with fantasy. I’m more interested in distilled renditions of those genres that have more singular focus I guess.

Under the Skin really speaks to me regarding its visuals but also the simplicity of the story: An alien in a human guise seducing men to turn them into food. It’s simple, it’s weird, and has an eerie atmosphere to it. I love, to death, films like 2001 and Interstellar and Lord of the Rings and Star Wars but their epic qualities don’t do much for me, it’s all the weird little corners of the worlds they build that I find the most intriguing.

This is part of our series profiling concept artists who work in fantasy or sci-fi. We interviewed Michael MacRae via email. This interview has been edited for clarity and brevity.