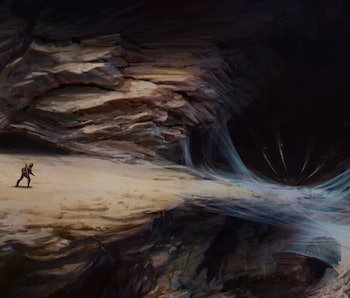 High fantasy produces some of the best concept art available online, so it’s a continued disappointment that Game of Thrones is the only successful project using the aesthetic of demons, dragons, and dark forests. Luckily, artists like Felipe Escobar churn out character designs and mystical environments which could easily ignite the imaginations of high fantasy authors or showrunners.

Over the last week, Inverse corresponded with Escobar about how his dark visions emerged from a solitary childhood in the forests of Chile.

I’m really interested in your art’s use of action and energy. There’s so much life in “Secta”, the environment you created with that vortex. How do you make your illustrations feel energetic, like they’re moving?

“Secta” is a really old illustration I did for Niebla Games, a Chilean IP, and one of the qualities that I kind of like about it is, obviously, the vortex. I spent the majority of the time trying to create that feel of motion, I attribute it mainly to the whole process of building a good composition, in this case a circular one.

And, on top of that, motion filters in Photoshop helped me build the motion effect. I think I was trying to get real attention on the focus (the vortex) so, it’s a circular pit, the people around it, the particles around it, everything pointed and strengthening that feel of “swirling around” into the vortex.

Your work appears to be rooted in high fantasy. Are you inspired by other works of fantasy? How much detail do you come up with, as far as the worlds your art is set in?

I love fantasy. I’ve always said that there’s no sense in reality without fantasy. For me, personally, it’s something I can escape to. Not to say that the reality I’m living is boring, but the same way a lot of people like to go on trips far away into the mountains, I like to take my hikes into my own worlds and just stay there for a bit.

I’m mainly inspired by my own childhood experiences in the south of Chile: the forests, the hills, nature itself, but as for other artists I would say that principally by those such as Brom, Todd Lockwood, Justin Sweet, Alan Lee.

In terms of details, I wouldn’t know, since that depends so much for every artist. But, I like to maintain a certain abstraction to my own concepts that give me (and the viewers) a wide amount of options, to keep day-dreaming. I consider that essential as an illustrator, because you want help people imagine, you want them immerse into your worlds. Leaving everything at the open is boring by being too evident, which I don’t find attractive.

You use dark nature imagery a lot. What about dark forests is so fascinating to you? How do you think the natural world interacts with the civilizations you illustrate in your work?

As I mentioned before, I grew up in the south of Chile, and I would usually hang out by myself. My parents used to take me to hikes or picnics, to the national parks close to our city, when I was a kid, and I found enjoyment in the silence and the particular darkness to it. I loved to stay and sit in a spot which would surround me with branches, leaves and ferns. It made me feel comfortable, in a way that I knew that I could see everything and nobody could see me. I was an only child and wasn’t that popular in school, so you might understand that kind of behavior.

For another hand, I think we as a human race, we do not belong in wilderness anymore. We find it to be enjoyable, but truly we do not belong there. Somehow I find fascinating this idea of constant and inevitable struggle, between our own kind and where we actually come from. It’s like the son fighting the mother. There’s some reason to it, but not much wisdom. I find attractive to elaborate this idea, where nature is this encased, dark, mysterious thing that attracts you to it, but rejects us at the same time. It gives some sort of depth and mystery to the images.

I love your creature design. Who do you envision using your riding dogs?

Well, those are actually concepts for a client I worked for in the past. I would say that little gnomes living peacefully away from other civilizations might use them. You can see that they have swords and such to defend themselves, but they wouldn’t really use them for battle, but as some peaceful transportation medium, with their inseparable companions. Living under giant hollow trees which are excessively decorated. Maybe like hobbits.

Your emotive orcs are awesome - I feel like we never give orcs their fair due, with a full range of emotion, and distinct personalities. What drew you to illustrating orcs?

First of all, the idea of doing orcs started, because they’re easy to capture as a concept. We all know what an orc is. It’s a pretty basic creature with very distinguishable traits. And so I used the concept to create a challenge in our “Concept Art” group in Facebook. I did one, and then I kind of let myself go. Is interesting the different kind of designs you can get by going back into the basic concept of something and pushing it a bit more into a different edge.

I see a couple of examples of your art integrating sci-fi imagery: works of metal or creatures with robotic pieces. Can you tell me a bit more about what’s going on in “Where None Have Yet Traveled”? It reminds me of Black Science, have you read that comic?

No, regretfully I haven’t read that comic. I’m not much of a comic consumer, even though I would love to be. That piece started as an assignment in a course I took in SmartSchool with Donato Giancola. The assignment was simple: to create a portrait with the name “Where None Have Yet Traveled”.

So I began doing sketches and somehow I got inspired and sort of challenged by the work of Donato. I find very hard to do hard surfaces (metal, industrial things, mechanisms or artificial things in general) and considered that assignment a good opportunity to get into it.

I initially wanted to portrait the feeling of wonder and fear, as someone that realizes an overwhelming truth. The context is nothing but an excuse, in order to to create the feeling. Space seems like a scary place to be, especially if you were to find familiar objects like pyramids. If you came across something like that in space, you’d have to ask yourself about the twisted relationship in between the things. It’s really all about trying to make people work their heads around it and make them come to a conclusion. But is quite difficult to create that path without making it too evident. It’s a game of millimeters, concept art, and somehow there’s no rule book to it.

Can you tell me the most visually interesting / inspiring thing you’ve seen lately, whether it’s in film, TV or gaming?

I consider myself a fan of Alien, but also of Lord of the Rings and games such as Dark Souls and Pillars of Eternity. Every one of those projects have certain aspects that make me really inspired into creating something.

Lately I would say that the book The Legend of Drizzt by R.A. Salvatore has been doing it for me. And I know that a book has really no visuals, but what it makes me imagine in my head is so powerful that it makes me stop reading it to get myself behind the computer and paint. But if we are being strict about visuals here I would say that Piotr Jabłoński is the painter that makes me go “wow!” for whatever he does. Love his paintings, love his concepts, love the darkness in his pieces.