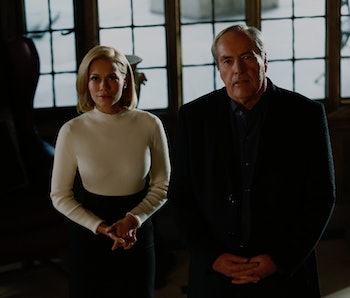 No one envies Gideon Malick (Powers Boothe). Though he commands the world’s most powerful and secretive order, HYDRA, his personal sacrifices has amounted to nada.

“Paradise Lost”, this week’s installment to Marvel’s superhero spy adventure Agents of S.H.I.E.L.D. was an attempt at humanizing the grizzled head of HYDRA who watched his beloved daughter die by Hive (Brett Dalton, formerly Grant Ward whose body is hosting Hive) all in the name of his lifelong cause. But now Gideon is probably brewing payback, because Malicks are no pushovers. But will that mean he’ll defect to S.H.I.E.L.D.?

Part origin story and part that moment in The Dark Knight when Commissioner Gordon realizes the Joker “wanted to be captured”, “Paradise Lost” isn’t John Milton levels of dramatic but gets the job done in gut punching viewers to feel bad for a guy that’s been a pain in the ass for the MCU since The Avengers. (Remember when Fury, played by Sam Jackson, says “I recognize that the Council has made a decision, but given that it’s a stupid ass decision, I have elected to ignore it? One of the stupid-ass decision makers was Gideon.)

But while it was fun to poke at the faceless council, anonymous and probably old suits behind a desk, Agents of S.H.I.E.L.D. has bothered to actually humanize one of these old suits. That’s the beauty of the cinematic universe, folks. There’s room for these characters to be more than one-note figures.

Still, that doesn’t mean Marvel is giving everyone three dimensions. Dragons like Giyera (Mark Dacascos) is still just a telekinetic ninja, and after a cool one-vs.-one fistfight with Ming-Na Wen’s Agent May he’s imprisoned onto a S.H.I.E.L.D. aircraft that has all but Daisy (Chloe Bennet) and Lincoln (Luke Mitchell) aboard. Whether it was intentional or not, Giyera escapes and brings everyone to Hive. Now Daisy and Lincoln must assemble the Secret Warriors, while Gideon has a chance to collude with Coulson (Clark Gregg) and the rest of S.H.I.E.L.D. against Hive. The enemy of an enemy is your friend, after all.