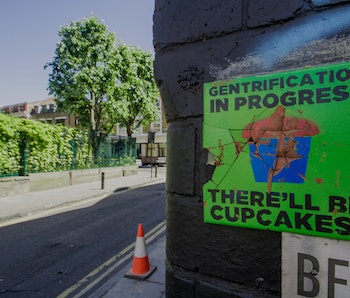 This week at the 25th International World Wide Web Conference in Montreal, researchers announced that the most technologically advanced way to predict gentrification in urban areas is through that most reliable of indicators: social networking apps.

Presently, governments try to use censuses to measure the socioeconomic well-being of urban areas. But census data is often lacking and inconclusive — the way to really get to the heart of what’s going on is exploring the content within social media.

The researchers behind “Measuring Urban Social Density Using Interconnected Geo-Social Networks” will describe gentrification as the displacement of residents within a “deprived area” by the arrival of a economically and digitally affluent population. Think of New York City’s Bushwick neighborhood, or, in the case of this study, London’s Hackney neighborhood. In their analysis the team identified Hackney as the near-perfect example of the sort of neighborhoods they were identifying: deprived in finances, high in social diversity, and with rampant gentrification.

The researchers discovered this pattern by making a new sort of socioeconomic map. They took data from Twitter and Foursquare to create a network of 37,000 users who had checked in at approximately 42,000 venues around London. Over ten months the researchers analyzed more than half a million check-ins, which allowed them to see the “social diversity” of London’s neighborhoods. They defined social diversity as by measurements of brokerage, serendipity, entropy, and homogeneity.

From there, the researchers compared the metrics they determined with the UK Index of Multiple Deprivation, which is a statistical index for the economic prosperity of England’s neighborhoods. They realized that correlation of a “deprived” area — meaning low economic status — with “high social diversity” meant that a neighborhood was in the process of being gentrified. Besides Hackney, the boroughs of Tower Hamlets, Greenwich, Lambeth, and Hammersmith seemed to be affected by gentrification.

The researchers say that they hope their predictive gentrification research could help policy-makers make more informed decisions regarding urban development. With a new interconnected geo-social network like this, local governments may have a better sense of how (and where) to implement measures that will protect neighborhoods from the negative effects of gentrification.

“Using interim real-time measures of urban pulse is appealing from a temporal and cost perspective but can be challenging due to the demographic biases of digital media users,” they write in the upcoming paper, which will be presented today in Montreal. “It is precisely these biases, however, that could provide insights into some of the most difficult to quantify and predict processes such as gentrification.”