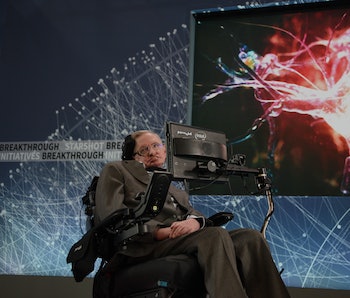 Stephen Hawking is a world-renowned theoretical physicist whose life has been the subject of a major Hollywood blockbuster. He’s currently working on a groundbreaking project to send tiny micro-spacecraft to Alpha Centauri with Russian billionaire Yuri Milner, but that’s not enough for him. ABC World News Tonight’s David Muir sat down with Hawking tonight for an exclusive interview, asking one of the smartest men in the world how it felt to be a cultural icon.

“I won’t feel like a true pop culture icon until I’ve been on the Kardashians,” Hawking said, through his specialized speech software.

Hawking and Milner think there might be Earth-like planets near Alpha Centauri, the nearest star to our Sun, and that Breakthrough Starshot’s micro-ships might be the best way to reach them.

While Hawking doesn’t expect to find alien life, he definitely thinks we should be on the lookout anyway.

“It is unlikely that there happens to be intelligent life in our nearest star system,” Hawking told Muir, but mentioned that space exploration often has a positive impact on Earth’s quality of life. “The rapid progress of technology for space exploration has improved people’s lives, so it would not be surprising if it [Breakthrough Starshot] brought benefits.”

Milner, the financial backer of Hawking’s sky-high expectations, said the program is more of an investment in the future of human progress and exploration.

“If we’re not going to achieve it in our lifetime then we’re going to pass the baton to the next generation,” he said.

Breakthrough Starshot just launched their website today, so details of the plan are still to come, but anything with Hawking’s prodigious brain behind it is definitely worth watching. Who knows, maybe it’ll even land him a spot on Keeping Up With the Kardashians.