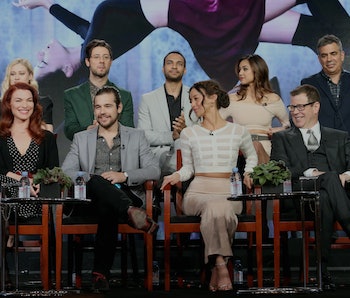 Syfy’s The Magicians wraps up its first season tonight with an absolutely bonkers season finale that’s sure to make many fans clamor for what’s next. The show’s story of a group of magical college kids, led by reluctant protagonist Quentin Coldwater, has navigated through its complicated plot, leading to one final showdown with the evil entity known as the Beast. Will Quentin and his Brakebills squad make it out alive? You’ll have to tune in to find out.

In the first part of a two-part interview, we spoke with co-creators and executive producers Sera Gamble and John McNamara about navigating the show’s tricky first season, how they threaded multiple books storylines together to make the TV show into its own standalone thing that complements author Lev Grossman’s source material, and more.

Now that season one is in the can, what do you do next?

Sera Gamble: We just reconvened the writer’s room several days ago, so all of our conversations right now are about Fillory, and there’s a lot of conversations about various gods.

What is it about this particular story that inspired you to adapt Lev Grossman’s novels into the show?

SG: I was so into the books the first time I read them. Amazon just recommended the first Magicians book to me and by the middle of it I remember calling my agent and asking if the material was available.

First of all there was something to me about the sheer wish fulfillment of being at that age and finding out that magic is real. That really resonated. But as you get further into the books you start to see what the story under the story is, like how the Beast happened.

What Lev always does is ground these fantastical elements in dark but very real human truths. I think both for John and me those are both very powerful story tools. It’s kind of the reason to do fantasy, to be able to tell stories that illuminate the tricky things about humanity and human nature.

You’re both TV veterans, but were there any particular challenges bringing the first season of The Magicians to the small screen?

John McNamara: It was all challenging, actually. You’re dealing with unique and very smart material and you don’t want to dumb it down. With every move, every story point, every character turn there was just a lot of healthy discussion and debate from day one. How best to take something on the page and make it three dimensional in the frame? That’s always challenging.

But this was particularly challenging because sometimes you get material or invent material that’s kind of — how do I put this mildly? — stupider than you can possibly believe. Your job is to actually make it smarter. The Magicians was very different. It was all how do we not turn this into just a soap opera with magic? How do we maintain Lev’s level of meta-themes and stay completely heartfelt and funny. It’s a really weird balancing act.

Sera and I have worked on other shows that were good, and I’ve worked on a couple of shows that are pretty bad. You definitely know the difference on day one, and everyday of The Magicians was to try and raise the bar, not lower it.

Do you think the first season lived up to the expectations you had when you went into it?

JM: That isn’t really for us to say. I think we’re the worst audience possible. All we see are the mistakes.

So there’s things you’d want to do differently if you had the chance to go back and change season one?

JM: Wouldn’t you? Hindsight is the ultimate rewrite.

I saw the greatest interview with David Lean from 25 years ago. This is like 20 years after Lawrence of Arabia, and he’s talking about this one incredibly famous scene of Lawrence sitting in the desert trying to think of how to invade Aqaba. It’s a beautiful scene with the wind and sand at night, but in the interview David Lean goes, “I really screwed that up.”

Similarly, whether we succeeded or not is never up to us.

The first season of the show mixes the first and second books. Was it challenging trying to pull that off?

SG: This season has been interesting and full of discovery for us. We knew we wanted to tell Julia’s story concurrently with Quentin’s. That made a lot of sense for a TV show. But we didn’t realize all the ways it would impact the bigger story. It was kind of an embarrassment of riches. For us it sharpened each story to be able to tell them alongside one another.

Going into the finale it’ll change the flavor of one of the last encounters really substantially.

What were some of the difficulties in doing that but still trying to have the show be its own thing?

JM: Our challenge was this: Quentin has an incredibly rich, dense, beautifully wrought inner life and monologue. You can’t really rely on that even if you’re going to use narration. It just won’t work because it’ll eventually just get tiresome when you’re filming something. Early on what we kind of sussed out in the clues of Quentin’s thoughts was that he was depressed, and may have at some point been hospitalized. That led us to create a scene that ended up being an entire season arc of Quentin’s time at a mental hospital that was a formative experience for him. It’s not in the books. But it’s something that Lev embraced immediately. It was as if we cracked a code that he had kept secret in the books. You look for clues that you can then turn into external action and conflict and drama and comedy.

One of my favorite things about the first season was that it wasn’t afraid to take narrative risks. The “World in the Walls” mixed things up and so did “The Mayakovsky Circumstance.” Was it always your intention to try to experiment?

SG: I think The Magicians books are written knowingly and from the perspective of being a fan of fantasy stories. So that tone is something we inherited. When you’re in a writer’s room figuring out how to do the TV version you start talking about the tropes and conceits that you see a lot in genre television. So we quickly decided which ones we wanted to do and which we wanted to subvert.

Which ones did you decide to try and subvert?

SG: “The World in the Walls” is a very good example. We obviously didn’t invent the idea of an episode where the main character doesn’t know if their reality is real. We talked about what the Magicians version of that is and how can we execute it with boldness to commit to it.

The answer to that was to do it really early in the season before people got too comfortable with the rules to our world. We assume the audience watching The Magicians is really savvy with genre television. They’ll recognize the tropes, but we want to keep people on their toes because that’s part of the fun.

The Season 1 finale of The Magicians airs on Syfy at 9/8c.