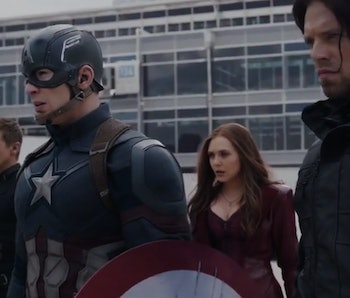 Chris Evans is back leading the Avengers as Captain America, only this time without the help of the team you probably recognize from the last two Avengers movies. Instead, the previews what the new Avengers team (formed at the end of Age of Ultron) looks like.

You might remember that the end of the last Avengers film left the world without Thor, Hulk, and Iron Man, who all went their separate ways. Now, Captain America saves the world with the help of Black Widow (Scarlett Johansson), Falcon (Anthony Mackie), Scarlet Witch (Elizabeth Olsen), and Vision (Paul Bettany).

The clip introduces a fight the team squaring off against a group of presumably HYDRA operatives led by Crossbones, an ex-S.H.I.E.L.D. agent introduced in Captain America: The Winter Soldier, played by Frank Grillo. While the whole context of the clip is unclear, the fight scene isn’t, and gives us a clear look at what we can expect action-wise from the new Avengers. If you were worried that maybe the Falcon or Scarlet Witch wouldn’t be able to deliver stunning sequences like the Hulk, don’t. Both pull off spectacular looking moves taking down HYDRA soldiers. Seeing them front and center when Civil War drops in theaters in May 6 should be worth the wait.