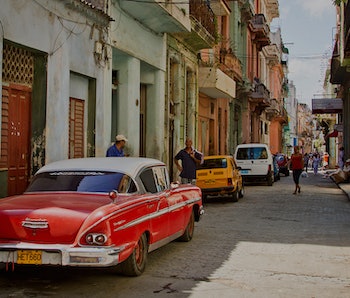 For over half a century, vestiges of Cold War conflict accounted for a ban on U.S. citizens traveling to Cuba. Then, at the end of 2014, Obama ordered the full restoration of diplomatic relationship with Cuba, cutting “loose the shackles of the past.” In late 2015, the two countries reached an agreement on regularly scheduled commercial flights to the island, eliminating the expensive charter flights that had provided the sole, non-maritime direct access. Tourists started flowing into the previously shut-off country and, though restrictions mandate visitors to Cuba fall in 12 distinct categories defined by purpose, the rules are hazy enough that anyone determined to get to Havana can.

There is, however, the sense that Cuba will change rapidly as the American influence becomes more palpable and American dollars more plentiful. Hopefully this is good news for Cubans, who have long been denied economic opportunities. But it also means that the Cadillac-driving, jazz-obsessed, shabby chic Cuba most Americans grew up imagining will disappear. Again, this is likely for the best, but travelers shouldn’t be blamed for wanting to experience the place before the monoculture takes hold.

Everything starts in Havana and, specifically, in Havana’s Plaza de Armas, Cuba’s oldest square, which is lined with palm trees and home to a statue of Carlos Manuel Céspedes, the man who blazed the trail to freedom in Cuba beginning in 1868. The nearby Cathedral de San Cristóbal, built by the Jesuits in 1748, is one of the oldest cathedrals in the Americas, boasting baroque architecture on the outside and classical components on the inside. It isn’t 1960s old. It’s straight-up old. But there is always temporal tension in Cuba. The Museo Nacional de Bellas Artes is perhaps the best example of this phenomenon. It feels like something out of the past, but its exhibitions, built around local artists like Guillermo Collazo, Rafael Blanco, and Raúl Martinez, feel strikingly modern. It’s a 21st-century museum in almost exactly the way the Museo de la Revolución, which documents Cuba’s evolving political regimes, isn’t. It’s hard to find history devoid of propaganda in Cuba, but that could be said for a lot of places.

If one wants simple political facts, there is always the Malecón, Havana’s 8km-long seaside drive. There is the ocean. Somewhere beyond that is America.

Varadero is a resort town in Cuba’s Matanza province, where visitors can relax on picturesque white sand beaches. Coral Beach offers some of the best snorkeling in Cuba, while a visit to Saturno Cave will transport you to a beautiful grotto setting with warm waters to swim in. Taste endless samples of rum at the House of Rum and, to top off your classic tourist experience, swim with some dolphins at Delfinario.

Located in the southeastern region of the island, Santiago de Cuba is the country’s second largest city. It was the home of revolutionary hero Frank País, who worked with students and young workers to form alliances that supported the revolution. Visit the famous Museum Emilio Bacardí Moreau, which hosts displays of the Bacardí family’s art, and pay a visit to the historic macabre museum Cuartel Moncada, which stands on the ground of a historic attack site led by Cuban revolutionaries including Che Guevara. Just northeast of the city center is the Plaza de la Revolucion, where Fidel Castro delivered famous speeches and where the Pope celebrated mass during his 1998 visit.

There are natural attractions as well — great diving, sport fishing, hikes — but Cuba has a history of protecting its natural assets (not necessarily counting its people) so tourists flocking south now would do well to prioritize cultural tourism. Everyone wants to be able to say they saw Cuba before it changed. Of course, it has been changing forever, but the next decade will bury the last.

More like this
Innovation
Jan. 19, 2023
A robot choreographer reveals why M3GAN — and all robots — should dance
By Molly Glick
Culture
11 hours ago
A Delightful New Hulu Show Finally Figured Out the Superhero Sitcom
By Dais Johnston
Culture
10 hours ago
Lost Jumped the Shark by Breaking Its Most Important Rule
By Jake Kleinman
LEARN SOMETHING NEW EVERY DAY.
Related Tags
Share: