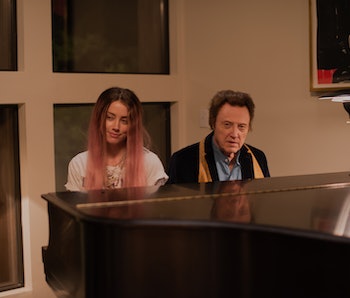 In the movie One More Time, a musical father-daughter relationship is way out of tune. Jude, a struggling 30-something singer played by Amber Heard, moves back in with her father Paul, an aging Sinatra-type crooner portrayed by Christopher Walken (sans cowbell). On the surface there’s little a former U.S. Army officer and infantryman could relate to — and yet, that’s who wrote and directed it.

“It’s a departure from stuff I usually do,” filmmaker and Gulf War vet Robert Edwards told Inverse of his new film. “You know they say, ‘Write what you know’? Well, in this case I didn’t know anything about that.”

Still, Edwards found a relatable truth about family. His own father, Capt. Robert Edwards, served in Vietnam and was played by Nip/Tuck’s Dylan Walsh in the 2002 war movie We Were Soldiers. So it’s clear Edwards did write about something he knew: picking up a legacy and then trying to live with it.

Apropos the film’s release today, in theaters and On Demand, I spoke to director Robert Edwards about the making of his new musical film that doesn’t exactly promise a happy curtain call in the end.

I have to admit, a movie about a Brooklyn punk singer and her Dean Martin dad seems left field from someone with your background. Where did One More time come from?

It was pure imagination. I just got interested in the idea of an artist, especially a performer whose personal life is at odds with his public persona. That got me thinking about what it’s like to be in orbit of someone like that, specifically in their family. The idea of a father/daughter story just sort of suggested itself from there.

Christopher Walken is a big personality. How do you direct someone like Walken and ensure he doesn’t overshadow or overstep the film itself?

His career speaks for itself. There’s a whole generation who don’t know Christopher Walken as a dramatic actor. They know the comedic Walken he does so well, and it’s so much fun, but he’s really capable of incredible nuance and poignancy.

In this movie, there’s a chance for him to show that. He’s a guy who’s very aware of what he’s doing. He really understood the character well from the beginning, and a lot of subtle things he was doing on set I didn’t even see until I got to the editing room and looked at the takes over and over again. I saw these little things that gave me lots of choices. When you’ve got a guy with that kind of talent, it’s really sort of up to you to use it and make the most of it, because he gives you everything you need.

What kind of energy did he have with his co-stars, specifically Amber Heard? He shares so many intimate moments with her in the film. Was it hard getting them to gel together despite being of different flavors?

I was lucky they met when they both signed on. The three of us met to read the script [and] they had an instant chemistry. I also knew it was an ensemble, and there was going to be big scenes with the whole family. I was fortunate that the other actors were such pros, Hamish [Linklater], Kelly Garner, Ann Magnuson, and Oliver Platt. We ran through it a few times and they gelled quickly. From there, it was just a matter of turning them loose.

We wanted to have these dinner table scenes where everybody talked over each other. It felt chaotic and messy and you can’t even hear all the dialogue. It was meant to be texture. They really embraced that, so that was one of the most enjoyable parts of it.

I’m glad you brought up the dinner scenes. Everyone knows what it’s like to have a ridiculous family dinner, like bad Thanksgiving. How did you approach directing those scenes, because I imagine it’s like controlling mayhem.

We knew they were going to be tricky. DP Anne Etheridge, the storyboard artists, the producers, the editor, we spent a lot of time planning it out. We mapped them like a military operation. Charts, graphs, storyboards to figure out how we wanted to cover it. Who needed to be on camera at what time. It was an independent film, so we didn’t have days and days to shoot, so we shot quickly. As I said, actors are trying not to walk on each other, not to step on each others’ lines, so you have to nudge them to do it, but once they get into it they really enjoyed that. It was a challenge to stitch together and find that balance, weave in the pieces you wanted the audience to hear, and let the others fall underneath. It was difficult to plan, to shoot, to edit, but that’s why it was one of the most challenging and enjoyable for me.

Music is such a major part of this film. There’s a lot of moments that could have been a “music video,” like *A Hard Day’s Night. What kept you from going in that direction and staying true to the scene instead of giving them a vibe?

That wasn’t ever something I was interested in. I mean, the music is certainly an integral part of the story and it’s about a musical family, but I wanted the performances to feel organic, not some extraneous thing like a montage we jump into. That was a very deliberate choice.

For a movie about music and musical character, the movie itself has its own soundtrack. An interesting soundtrack. How do you choose music in a film where its characters, on the surface, represent disparate genres and eras?

It’s a mix, because Paul of the kind of Big Band crooner idiom, even he was born a little too late for the glory days. Then Jude is obviously a much later rock ‘n roll persona. I wanted those two styles clash. Then there were songs I always had in mind for, and always felt they were going to find a place in the movie like the Nina Simone song that ends the film. I wanted Jude to be a meaner thematic, but we don’t hear any meanness in the song until the end and when you do it’s kind of an obscure one.

The Flaming Lips were written into the script early on. I’m a fan, and it felt like it was the kind of band that might plausibly have a Paul open for them. I didn’t know Christopher Walken was going to play that part when I wrote that scene, but once we cast him it was a perfect fit, because he’s the kind of strange cadences. It worked for that scene. There were a lot of music cues we played around and there were great songs that didn’t work. It’s always a challenge to find stuff that’s going to match when you actually put it to picture.

You mentioned just now these characters are somewhat out of time. Jude is too old you be a YouTube pop star and Paul missed the peak of his style. What made you want to explore these kinds of artists who are, in a sense, too late?

I think those people are more interesting than people hitting the bulls eye. That’s part of what’s sticking in Paul’s craw. He didn’t get the acclaim he thought he deserved. Didn’t reach those heights, bad timing. Jude inherited the talent but also the self-destructiveness, the self-sabotaging qualities Paul had. I was interested in burdening the characters with those challenges, rather than having an easier road.

I couldn’t help but notice while watching the film, there’s a lot of debates and strong opinions these characters have about music. I have to ask, do you really think Nina Simone is god?

[laughs] I love Nina Simone, but nobody’s God. I like having them debate and argue and be passionate about things. Even Paul has moments when he’s saying things I think are very true. Nobody wants characters to be flat and two dimensional, I wanted everybody to have moments of nobility but also moments of bad behavior. Paul is a guy, because he’s a big egotist, is more self aware than others give him credit for. There are times in the film he says things that are wise, he’s learned over his years despite his flaws. When he says those things, it comes as a surprise to the people around him because they’re not used to hearing pearls of wisdom come out of his mouth.

You were trained in documentary filmmaking. How did that form influence your narrative work, especially in One More Time?

There’s almost no handheld camera, which is big in film. A shaking cam connotes truth and that’s the thing people look for in documentaries and fiction film has co-opted. In terms of the audio especially was influenced by the documentary aesthetic. Having a chaotic sound design, especially in dialogue. People are fighting [so] have it be sort of messy and incomplete the way real speech is.

So now that One More Time is in the books, what’s next for you?

My new project is very different. It’s The Bomb in My Garden, an adaptation of the memoir of the chief scientist in Saddam Hussein’s uranium program. The guy spends twenty years on the black market, trying to buy parts and plans for a centrifuge to enrich uranium weapons grade. He came very close, it was just a few months from having the bomb in 1991. When the U.S. invaded, he took those components and buried them in his backyard in Baghdad until he dug them up in 2003, took them to the U.S. and said “I know you want to throw me in prison, but this is what I have to give. But you have to get my family out of Iraq.”

I understand you’re also working on something with John Woo. What is it, and how’s that going?

I’m working on a seven part mini series, a Chinese-American co-production, about the Flying Tigers in World War II. The American volunteer pilots who went to China before Pearl Harbor to fly on behalf of China, which had no functioning air force at the time being pummeled by the Japanese. It used to be a well known story, kind of faded from history, much better known in China than here. John’s the creative head of that project. A very different movie, not nearly as many musical numbers.

More like this
Entertainment
Sep. 26, 2022
Christian Bale reveals the secrets of his “weird” transformation in Amsterdam
By Jake Kleinman
Culture
Sep. 15, 2022
5 years ago, Nicolas Cage made his most disturbing movie ever
By Laura Kelly
Science
Sep. 24, 2022
Is a fact always true? A philosopher explains how to spot the difference
By Peter Vickers and The Conversation
Related Tags
Share: