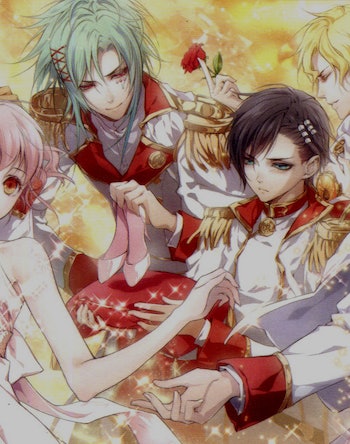 Otome is a still-emerging genre of mobile gaming which allows the user to roleplay as a character, typically female. The primary objective of otome games is to navigate social structures and eventually choose a NPC “boyfriend” after being presented with several options. More complex games open up a chat function once the player chooses a character to “date”, and that character checks in with the player via text, the way an actual man would.

All otome games are remarkably similar, following the same pattern — choose your fictional guy, trade automated responses regularly, change partners if you want — but the games differ in environments. Some are based in workplaces, others in academic settings. A great many involve different paranormal storylines, fantasy characters, mythological creatures, monsters and/or aliens.

It’s difficult to find comprehensive, reputable sources on the development of otome games, but academic Hyeshin Kim wrote about the trend in her cultural essay, “Women’s Games in Japan: Gendered Identity and Narrative Construction.” According to Kim, otome games were developed, originally, by an all female team who intended the product to take off with adolescent girls in Japan. Surprisingly, otome’s primary demographic became women in their mid-20s, and the narratives of the games changed from teen dating sims to scenarios set in the adult world. Otome, after developers reflected on the games’ appeal to adult women, began to include situations like navigating a relationship with a coworker, or letting a guy down easy after two awkward dates.

‘Angelique’ and otome games in the 90s

“The 1994 game Angelique succeeded in establishing a loyal and close-knit fan base by actively utilizing popular female culture such as shoujo manga (girls’ comics) and the fan base for voice actors,” Kim says. “Angelique also set up the specifics and conventions of women’s games: a focus on romance, easy controls and utilizing other multimedia. Women’s games indicate that genderspecific games can be more than educational tools to familiarize girls with technology or perpetuate stereotypes; they can be a significant extension of female culture into the realm of gaming.” Kim, and other cultural theorists like her, have come to accept otome gaming as a liberating creative zone for female game developers and gamers to explore.

Back in 2011, Aksys, a video game company specializing in “localizing” Japanese games to American audiences, released an English version of Hakuoki: Demon of the Fleeting Blossom on PSP. Aileen Viray, the company’s marketing manager, said of the release, “This is really experimental for us because otome games aren���t really known in the U.S. It���s our first otome game and I believe it���s one of the very first otome games in the U.S.”

‘Shall We Date?’ and other mobile apps

Today, there are so many otome games available on the iTunes app store that fans have written explanatory wikis just to make sense of them all. The “Shall We Date?” series, in particular, is astoundingly popular. The core series has released multiple spin-off games set in Oz and Wonderland. Others involve ninjas, wizards, demons and angels.

What’s the point of a dating simulator?

Playing an otome game is an incredibly lonely experience, as the fantastic and imaginative environments never allow you to forget that you are interacting with a developer’s image of an attractive man. It’s rare for classic otome games to employ any irony, unlike fun, comedic simulators like Hatofel Boyfriend, in which the player woos and dates pigeons. Though the simulation is painstakingly detailed, it’s still an artifice. The fun is supposed to come from the fantasy.

Also, otome games aren’t really intimacy simulators; they actually strive to make the player feel desired by multiple men. Each game’s interface is set up to feel just a bit overwhelming, as one might if she was trying to keep four or five men happy at once, accepting compliments and managing her schedule in order to see each of them. The otome experience feels akin to watching reverse harem anime, in which a single female character manages the attractions of several male characters. Reina Scully from SourceFedNERD explains the genre this way:

Like in Fruits Basket, reverse harem anime follows a female protagonist who is surrounded by a bunch of sexy boys. I mean men. […] The lead is indecisive about who [s]he wants to choose, and subsequently is sorta, kinda with all of them.

Developers working for American game companies are still trying to wrap their heads around expanding the otome appeal. Last summer, Kotaku began to trace Japan’s history of dating simulators, touching briefly on the games’ growing popularity in the states. Though there is undoubtedly a market for fictionalized dating roleplay in Japan, American companies are still struggling to define exactly who is playing otome, choosing between illustrated men based on their personality profiles. Though we haven’t quite figured out how to talk about otome, it’s likely to continue growing as an enterprise. Many users may just continue to buy the games and play through them in secret.