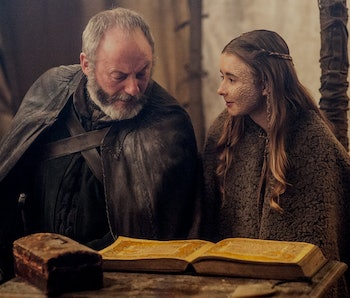 Liam Cunningham, who plays Davos Seaworth, AKA the saddest and last good man in Westeros, appeared on Conan last night. After admitting how intimidated he was to meet George R. R. Martin, he revealed that Martin told him a Game of Thrones secret. Conan tried to pry it out of him as valiantly as Davos tried to save poor Shireen, but like the latter, it was to no avail. After some more back and forth in which Conan tried to get the intel on Jon Snow (nice try, Conan) and teased Cunningham about HBO snipers, they got to the main event: a clip from Season 6.

The clip doesn’t reveal much — otherwise they never would have shown it to us — but we can still conclude from it that Jon Snow Lives. Take the following pieces of evidence.

He’s always been among the most loyal Pets of Thrones; we’d expect no less.

Note Dead Jon Snow in the corner with Ghost, Davos and his men draw swords and face a door. They seem to be in a small chamber.

The traitors wait on the other side of the door

Led by Alastair Thorne, Jon’s murderers don’t seem cool with the fact that Davos, ghost, and a handful of loyal men are sequestered away with Jon’s body.

Fuck you, and your stupid face, Olly

Nothing against the actor, he’s probably a perfectly nice guy with a great face. But fuck Olly.

So why is this confirmation that Jon Snow Lives?

Yes, he looks pretty dead — not Princess Bride mostly dead, but very much all-the-way dead. But Alastair Thorne and his men presumably want Jon’s body to burn, as is customary to prevent White Walker-ism. Davos and Jon’s loyal buddies are smart; they know the danger of White Walkers. And yet, they seem serious about guarding Jon to prevent the burning. Davos, a non-violent man, is taking up arms. There’s no reason for them to be so adamant unless they know something we don’t. Perhaps Melisandre — not shown in the clip — gave them a message to preserve Jon’s body, or perhaps they’ve got their own schemes brewing.

Either way, Davos is a rational man, and the fact that he’s guarding Jon’s body so fiercely is all but a confirmation that Jon Snow Lives. Or at least, needs his body preserved so that he can return in some form.