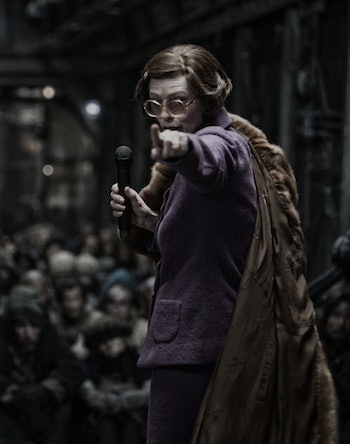 The best art typically reflects the anxieties of the society that bore it. In other countries, the only thing reflecting those worries is in art, and it can be argued that no class on modern Korean history is complete without understanding the films of the Korean New Wave. They offer some of the best rebukes to a government that has sometimes used Cold War-style politics despite being a striving Democratic country. Turns out South Korean cinema is often a battleground between the government and filmmakers — and how to best represent society to their citizens and the world.

The story behind 2006’s The Host, Bong Joon-Ho’s South Korean horror-monster film, was widely publicized. The plot follows a family as they battle a large monster after it takes the youngest daughter, and it was inspired by a real incident in which an American military base disposed of hazardous chemicals into South Korean rivers. Bong used the political incident as inspiration, and imagined a world in which an eerily similar incident actually birthed a monster in Seoul’s Han River.

The implications of the story, American imperialism and its military presence on the Korean peninsula, were lost on those unfamiliar with modern Korean history — which, to be fair, isn’t widely known. It helps the movie is fantastic in its own right, and only doubles as a political satire in the right context. But layered underneath the imagery of American military presence was the even more subversive narrative of the incompetent South Korean bureaucracy. The Korean government officials in the film are perfectly happy to tread on their own citizens if it’s an order from their American counterparts. For international audiences, The Host was a fantastic entry in monster movie canon, but for local South Koreans, The Host was a political satire of Dr. Strangelove proportions. Even better, the film rode the wave of political discontent to become one of the highest-grossing domestic films in South Korea.

Still, 2006 was 10 years ago and the South Korean film industry has only grown more mainstream since. Instead however, this success seems to have emboldened some directors into making even more direct critiques on South Korean politics. Veteran, a South Korean film which received a limited theatrical run in the United States, pits detective Seo Do-cheol against a third-generation heir to a billion dollar conglomerate, Jo Tae-oh. Seo, a classic hard-working gumshoe in the mold of loose cannon detectives from the 80s, squares off against Jo, a billionaire heir who believes his wealth and status puts him above the law.

You might have heard of these wealthy sons and daughters of powerful conglomerates from an incident in what was called the “nut rage incident”. In December 2014, Heather Cho, daughter of the CEO of Korean Air, as well as Vice President of her father’s company, verbally assaulted a crew member and demanded the aircraft she was on to taxi back to the gate at John F. Kennedy International Airport. She was apparently dissatisfied with the way she was served her airline macadamia nuts.

The fallout was tremendous. The subsequent legal investigation found that this was not Cho’s first incident in attacking a crew-mate on the airline her family controls. A similar incident in 2013 was found to have been covered-up by the company. There is an understanding that members of these family-owned conglomerates (or chaebols) are given special treatment in South Korean society. However, even as democratization rapidly progressed, the chaebols retained a sort of oligarchical power over South Korean political circles, avoiding criminal charges for many of their family members and board members.

So, when a film like Veteran comes out, depicting a working-class hero taking down one of these privileged members of society, South Koreans resonate with a message like that. In fact, they’ve made the film the third highest grossing film in South Korean cinema history. It’s important to note that Veteran, which retains an 88% fresh rating on RottenTomatoes, is also one of the best throwback detective action-comedies in recent memory.

And the list of all-time grosses in South Korean cinema are littered with films that make political challenges against the government. 2013’s The Attorney is loosely based on the 9th President of Korea and tells the story of a lawyer who attempts to exonerate a group of students falsely accused of communist sympathies. More recognizable is Snowpiercer, Bong’s first western-produced film starring Captain America’s Chris Evans as the revolutionary leader aboard a sci-fi train that houses all the world’s survivors in the wake of a second Ice Age. The train is segregated by class with racial and imperial overtones and is one of the finest dystopian sci-fi films ever made.

Korean filmmakers have taken upon themselves to act as watchdogs of South Korean society, but it helps that their films have the protection of bringing in financial and critical success. That said, the same holds true if a film were to reinforce the disputed narrative of its government, or worse, take advantage of certain historical biases for profit. The 2014 film, Ode to My Father, which follows a man from the Korean War through the authoritarian regimes of the 70s and 80s into the modern day, was criticized by South Korean film critics as glorifying the country’s authoritarian past. The feel-good narrative however remains as the second-highest grossing film in South Korea.

It’s interesting to see the contrast in the ways some of these messages are portrayed in films, and in what sort of films they are shown in. Genre films often take on radical topics thanks to their extreme, and highly specific, peculiarities. Whether it’s the monster movie The Host, the 80s detective film Veteran, dystopian sci-fi Snowpiercer, or literal cold war thriller JSA (from Oldboy’s Park Chan-wook), each South Korean genre flick has a distinct social message. Meanwhile, films that regularly attempt at romanticizing the past are often prestige period pieces like Ode to My Father, or the Korea vs. Japan historical epic The Admiral.

South Korea is a unique nation that is at once highly capitalistic and democratic, but with relics of the Cold War still very much active in political legislature. Often times, the threat of North Korea (a very real threat) is abused when it comes to political opposition. NPR has recently covered how these old legislation affect Koreans today. As such, the news agencies of Korea have the difficult task of reporting on the news without crossing these arbitrary lines into political dissent. If the democratic nature of South Korean politics seem too severe, it is perhaps paradoxical that the capitalist nature of South Korea is what is allowing these films to be made so politically in the first place. As mentioned before, a lot of these films end up becoming huge successes both at home and abroad. As long as these movies continue to make a great cultural contribution, they are encouraged to continue making these sorts of films.

The point remains however, that in South Korea, political dissent is highly subjective but comes with real consequences. While not full censorship, the South Korean government has the power to silence opposing political views or critiques under the guise of protecting their country from communism. If that isn’t the premise for another Orwellian genre film, I don’t know what is.