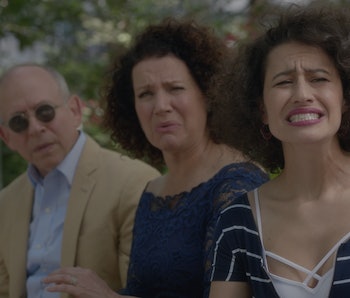 Picking up from where last week’s episode left off, Abbi (Abbi Jacobson) and Trey (Paul W. Downs) are still hooking up. Trey wants to take Abbi on an official date, but Abbi still thinks of Trey as an embarrassing guilty pleasure. She starts planning to tell him on their date that she wants to just be friends-with-benefits and keep things the way they are now. Meanwhile Lincoln (Hannibal Buress) breaks up with Ilana (Ilana Glazer) because he wants to be monogamous with the new girl he’s been seeing. He tells her he isn’t comfortable with the open relationship, which noticeably upsets Ilana, although she won’t admit it just yet.

Ilana’s parents (Bob Balaban and Susie Essman) come into town to celebrate their 35th wedding anniversary. Abbi tells Ilana that she won’t be able to attend the dinner because she’ll be busy training Shania Twain at the gym, a lie to cover up her date with Trey. Of course Abbi’s date is at the same restaurant as Ilana’s parents anniversary celebration. Abbi repeatedly excuses herself from both dinners as she makes her way between the two, which works until Ilana’s mom chokes on a lychee. Panicked, Abbi yells for Trey who rushes over to Heimlich Ilana’s mom back to health. That’s when Ilana realizes Abbi has been lying to her about Trey. The combination of dishonesty from her best friend, and being broken up with, sends Ilana into a hysterical crying fit. Trey overhears Abbi consoling Ilana by explaining that Trey is nothing more than a dumb hookup, which isn’t even the truth anymore, and the episode ends with Abbi and Ilana sharing a joint in the tub, literally soaking in their miseries.

The tail end of the dinner scene, when Abbi talks Ilana down, is revealing in a way that’s not typical of Broad City, especially in terms of Ilana’s staunchly progressive character. The show is funniest and most relatable to a young crowd when it pokes fun at her stubbornly radical character, which ironically enough, bogs her down just as much as a provincial attitude. The exhaustingly open-minded aspect to her character is most evident in the way she approaches relationships: she basically forces an open relationship on Lincoln until it blows up in her face.

This scene is a refreshingly humanizing moment for Ilana that shows us, despite the fact she flaunts her progressiveness, maybe a monogamous relationship is what she wants after all. She’s sobbing as she tells Abbi that Lincoln has broken up with her, the real reason she’s upset, not that Abbi lied to her. In fact, she mentions that Trey is cute at some point during her sob fest.

While Ilana continuously lies to herself about what she’s comfortable with in a relationship, Abbi’s dishonesty manifests in lying to her best friend. Abbi is more flustered and nervous than Ilana, which makes her true emotions more transparent. Since Abbi began developing legitimate romantic feelings for Trey in the last episode, it’s obvious that the only thing keeping her from admitting she likes him is the fear that Ilana would judge her for being into someone who is seemingly vapid.

The kicker is: Trey’s genuinely sweet, and sometimes that’s all it takes. While it’s understandable that Abbi would be slightly reluctant to admit her feelings to Ilana, the lengths to which she goes in order hide them is frustrating. Ilana is obsessed with Abbi and would support her and love her no matter what. The only thing Ilana asks is that Abbi never hide anything from her.

The episode ends with Abbi and Ilana taking a bath together and smoking a joint, mulling over their love-related troubles. Abbi is finally being honest with Ilana in terms of her feelings for Trey, which ends up not being a problem at all for Ilana. She just wants to see her best friend happy. Ilana, on the other hand, has let her guard down as she begins to admit that a monogamous relationship may be in the cards for her. Abbi’s and Ilana’s best friendship has represented coveted “friendship goals” over the course of three seasons, but this added dose of honesty makes those goals more representative of an achievable and healthy friendship.