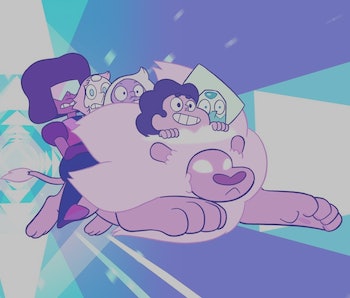 Not only are we getting the third season of the award-winning Steven Universe this June, after the long hiatus, but Cartoon Network has also greenlit seasons four and five to air afterward. With a long narrative ahead, we can expect a lot from our favorite Crystal Gems. These are our predictions.

After Peridot’s stay on Earth, she learns that the planet is worth saving, and she even calls her superior, Yellow Diamond, to try to convince her to leave Earth in peace. Unfortunately for Peridot, the conversation turns sour. Yellow Diamond doesn’t want anything to do with Earth. She wants it destroyed, in fact. Fast forward a few seconds into the discussion, and the previously devoted gem loses her temper and calls Yellow Diamond, one of the rulers of the Homeworld, a “clod.”

In the next season, we should see what comes of Peridot’s decision to swear loyalty to Earth instead of her Homeworld. Yellow Diamond might have a vendetta against Peridot now, and we could see a lot more action happening in the future. Extraterrestrial gem forces could be tracking her down.

Learning about the Diamond Authority

Considering the appearance of Yellow Diamond and the brief recollection of Blue Diamond by Garnet, the leaders of the Homeworld will most definitely show up in the coming episodes, whether it’s just Yellow Diamond again or a new ruler. Either way, we’ll learn more about the Homeworld and how the Diamond Authority plays into the hierarchy and the society of the world. How many Diamonds are there?

The lore in Steven Universe is already detailed, so we should be able to dive into the culture of the gem’s home planet more thoroughly and get a better understanding of the place that the Crystal Gems can no longer go back to.

This one is a given, especially because Rebecca Sugar, not only the mastermind behind the show itself, but also the composer of songs within it and those of Adventure Time, too, is preparing more music. Each song will further character, mood, and plot as they have before.

In season two, we got a glimpse into the past through both Pearl and Greg, but we still don’t know exactly what happened those thousands of years ago to Rose Quartz that would make her switch sides after all of that time.

We also don’t know exactly what happened to Rose’s consciousness when she bore Steven. In her video to him, she says that half of her will be in him because her gem will now be his, so I can definitely see her popping up again, and not just in a flashback. Steven has already shown an aptitude for linked dreams with Lapis Lazuli, so Rose may be able to speak with Steven through his dreams. There will probably be a storyline that delves into what her gem passing on to Steven really means.

Her powers also might also contribute to the coming seasons. Steven is able to create barriers and heal with his saliva – half of her powers – so we’ll be able to see whether or not he inherits any more or not.

Reappearance of Malachite and Lapis

Where we left Lapis, she was struggling to control Jasper, a gem she fused with back in the episode “Jail Break” to protect Steven, in the depths of the ocean. Lapis trapped Jasper with her water-controlling abilities and the two of them are battling for control over their new body Malachite. Steven was communicating to Lapis through his dreams, but she told him she didn’t need his help and that she needed the utmost concentration to hold Jasper down.

The clip above was released in February and it gives us a sneak peek into what will happen in the next season. Malachite fights with the fused version of Garnet, Pearl, and Amethyst and its clear that Jasper is the one in control of the body.

Another clip shows Lapis freed from the fusion, but it’s unclear as to how she escapes from her self-imposed imprisonment and what happens to Jasper; but we definitely can’t wait to find out.