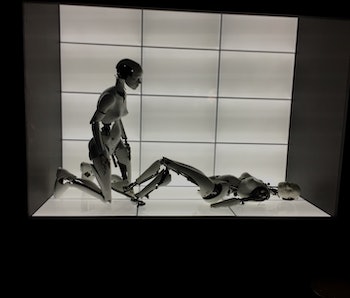 Human-robot love is quickly moving out of the realm of sci-fi. Or at least the human to robot part is. A new study found that volunteers elicited tell-tale signs of arousal after touching the “less accessible” parts of a robot, namely the areas on humans that would have the buttocks and genitals.

A dozen volunteers — six men and four women — responded to requests from a robot to touch or point to various parts of its body while wearing a sensor on their opposite hand that measured skin conductance, a common barometer for determining arousal. Over 26 trials, the participants recorded stimulation when asked to touch, but not when asked to point to, the “intimate” areas of the robot.

Put bluntly, “social conventions regarding touching someone elses private parts apply to a robot’s body parts as well,” Jamy Li, a mechanical engineer at Stanford University in California, who led the study, told The Guardian. Apparently, according to the researchers, associating a robot’s “less accessible” regions with our own “intimate” parts constitutes a social convention and not an inherent link with our biology.

“Social robots can elicit tactile responses in human physiology, a result that signals the power of robots, and should caution mechanical and interaction designers about positive and negative effects of human-robot interactions,” the report reads.

We all know of the growing spectre of sex robots, but the scientists caution that we may find ourselves sexually attracted to more than just the robots we’re supposed to want to bang.

“In future, robots with human forms may assist us in personal and public spaces,” the report says. “What kinds of relationships will people develop with these robots? While they are clearly not human, social conventions, such as body accessibility, may apply to robots, as well.”

Clearly, this sex with robots thing is going to be worse than we thought, especially if roboticists start making every robot sex-accessible, just because they know that’s what people secretly want. Then, people will start having robo-affairs and robo-rape.

“Our work shows that robots are a new form of media that is particularly powerful. It shows that people respond to robots in a primitive, social way,” Li said.

So, your desire to touch robots in their private parts is very primitive. But you should probably be ashamed of yourself, all the same.