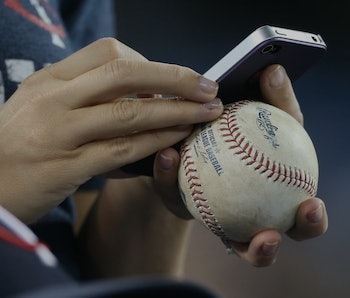 In order to utilize and analyze the vast data collected during baseball games in real time, Apple and the MLB have signed a multi-year deal to equip each team with a large 12.9-inch iPad Pro.

But, when it comes time to make a call to the bullpen for a pitcher change, there will be no iPhones in sight.

That’s because in 2013 the MLB signed another multi-year deal with T-Mobile and Samsung to equip teams with Galaxy phones that couldn’t be interfered with from fans in the stadium. So some might have suspected Galaxy tablets to be in the hands of coaches and players this season, but even the MLB realizes that Android tablets are lacking when compared to Apple and Microsoft.

The iPads will give teams the ability to analyze performance stats, weigh potential pitcher-hitter matchups, look at “spray charts” predicting where a player is most likely to fit a ball, and watch play-by-play video.

All of this will be done through a new app called MLB Dugout, which was built by the MLB’s Advanced Media division with some help from Apple itself.

The shift breaks a long-time ban on the use of electronic devices for anything other than calling to the bullpen, and even then, many teams typically opted to continue to use the landline phones installed.

For a game that is notoriously stats driven, to coaches the change makes a lot of sense as the large tablet can replace large binders that have been used for years and make the process more streamlined.

Phil Schiller, Apple’s senior vice president of marketing, said the video component will be especially useful to players who need to study the movements of pitchers or hitters without having to run back to the locker room to do so.

Apple’s deal follows a similar arrangement struck by the NFL and Microsoft to give each team a Surface tablet for use during games. That partnership has been shaky in recent years, especially when there was a malfunction during the AFC championship game between the Denver Broncos and New England Patriots.

The iPad Pros will be outfitted with large protective cases with the MLB logo affixed to the back and will begin using them this season.