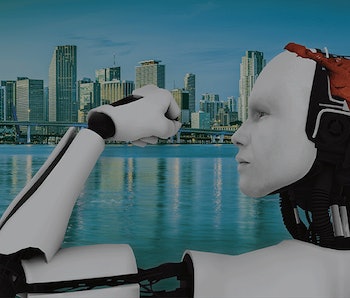 Robots have a less-than-obvious interaction with the law, and it’s poised to only get weirder in the future. Who’s at fault when a self-driving car kills a pedestrian? Who’s to blame when an automated delivery drone is late for its dropoff? These questions don’t have satisfying answers, but the lawyers, just like the engineers bringing this technology to life, are working on it in Coral Gables, Florida this weekend.

The legal sector is interested in engendering a professional culture that has eyes more fully open, looking to the future to be ready for the unlikely ways that robotic technology might come into contact with the law. This interest is furthered every year at a conference called WeRobot, the 2016 edition of which is taking place today and tomorrow. Thinkers on the topics of law and robotics get together for panels, events, and socialization to promote the sharing of ideas and information about the state of related fields. It’s Comic Con for people who are very specifically interested in the legalities of emerging technology.

It’s sure to be a heady good time. Panel titles include “Legal Personhood For Robots,” “The Ethical Characteristics of Autonomous Robots,” and the drenched-in-wordplay “Siriously? Free Speech Rights for Artificial Intelligence.” Ryan Calo, a prominent scholar out of the University of Washington School of Law, who writes and speaks about topics at this intersection, drew much attention this evening during a panel called “Robotics In American Law.” Having contributed heavily to the book Robot Law, which was launched today at the convention, he is something of a breakout star in this niche.

Peter Asaro of the Campaign to Stop Killer Robots, a grassroots movement aimed at limiting a robot’s capacity to kill, gave a presentation titled “How to Engage the Public on the Ethics and Governance of Lethal Autonomous Weapons.” He muses that the media muddies the waters on conversation about lethal autonomous weapons (“killer robots”) every time they use a picture of a Terminator to illustrate a pertinent story.

As weird or emerging as the field of robot law might be, you ought to know that the U.N. is very concerned about it and has held annual meetings on the topic to tease out the complications. Asaro and his camp make their preference known clearly: no killer robots, please.

WeRobot is an important conference because it encourages people who work in law to get ready for a nebulous time that seems to loom ever-closer: a time in which technology has much more to do with shaping the quality of our lives than we might perceive.

Perhaps someone will have to object on behalf of humanity soon.