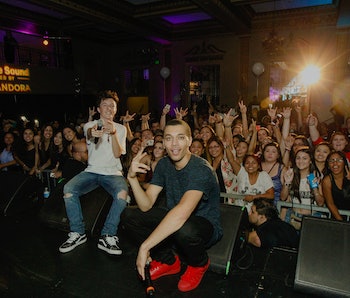 The teen party rap duo Kalin and Myles was too beautiful to live. After all, here was the PG-13 millennial rap duo it felt like we had been promised. They had teased that absent houseguest — party rock — back into their chamber, ending a woeful stretch of rockless nights around the flip cup table. “Origin story” may be a curse word around these parts, but that’s because nothing in the MCU is as potent as the parable of Kalin (White, 21) meeting Myles (Parrish, 23). Though they had seen each other at “functions” and had socialized, they really clicked when they were seated in the same row at the premiere of Never Say Never, the Justin Bieber movie. They released the Solo Cup banger “Trampoline,” an EP and a self-titled album. The rest is history.

But, a couple of days ago, they published the following note on their homepage:

2016 has begun with many changes in our world, one of which was parting ways with our record label. This new found independence has allowed us to take some time to reflect and decide how we would like to move forward in our careers.

After a lot of thought, we’ve decided to take a break from making music together to focus on individual aspirations. The past five years together as Kalin and Myles have been amazing. It has been incredible traveling around sharing our music and getting to meet so many of you. Getting to know you and grow up with you has been a privilege. Your support has allowed us to chase our dreams and we are forever grateful. We have grown a lot during this time and our hearts are now in different places.

Although this will be the start of a new chapter, the one thing that will remain the same is our support for each other and all of you. We’re excited about the future for all of us. Thank you for everything. We love y’all!

First off, there’s no pain like knowing you were part of something called KAMFAM after the fact, but this sort of knowledge only deepens the pain, sharpens it into something more like a hollow longing that you can’t retract or even live through. It’s retroactive FOMO that you missed out unknowingly; it’s RFOMOU, the worst kind I’m aware of. There’s not much to take solace in at the moment, but still my younger brother — my bro IRL and in KAMFAM — tried:

Still, there’s hope. I know what crazy diamonds do; they shine on. Kalin, Myles, here’s to making it go trampoline, from now into eternity.