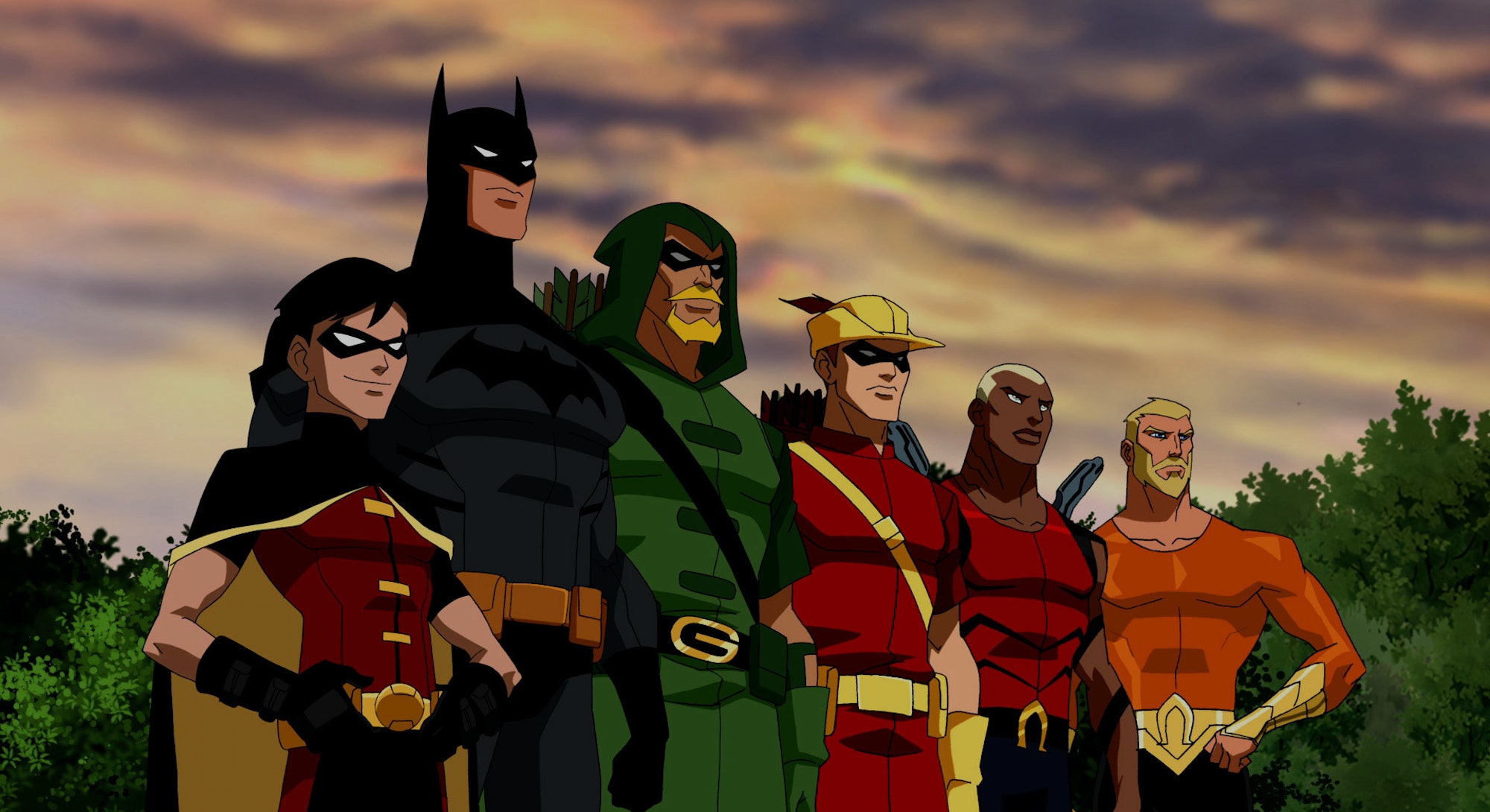 Aqualad, Robin, Miss Martian, Superboy, Kid Flash, Artemis. These sidekicks to the world’s greatest superheroes graduated to a league of their own in Young Justice, the acclaimed animated series from 2010, which delighted audiences until its cancellation in 2013. Created by Emmy-winner Brandon Vietti and Greg Weisman, who also made the cult favorite Disney cartoon Gargoyles, Young Justice developed a feverishly devoted fandom but was killed due to — get this — bad toy sales.

Fanboy rage aside, it makes sense when you peek behind the scenes. To get the show on air, toy juggernaut Mattel struck a merchandise deal which in part funded Young Justice. But the toys didn’t fly up, up, and off the shelves like the company had hoped. Still, dwelling on the past isn’t Greg Weisman’s style. “We could argue the toys didn’t appeal to a large enough demographic or the correct demographic,” Weisman told Inverse over the phone on a recent weekday afternoon. “It’s moot. What’s done is done. It’s too late to have that argument.”

But it’s not too late to do something. Shortly after Young Justice Season 2 hit Netflix last month, renewed interest in the show’s future awoke the internet’s sleeping giant-fandom, and Weisman began the hashtag #KeepBingingYJ.

But hashtags, petitions, and fan videos — as much as Weisman appreciates those — aren’t enough. “You have to understand why it will not be on in the first place,” he explains. “The reason is financial. Mattel had the license and contributed to produce so the show would promote toys. Toys make money. What you have to demonstrate to the powers that be that the show is financially viable. There are three key ways to do that.”

Okay, so what are the three key ways?

First, and most important, is we have opportunity. Netflix in the United States did not have Season 2 until February 1st. Season 1, as I understand it, did well. When Season 2 went up I went on Twitter and Facebook and said, “Guys, if you’re interested in Season 3 binge watch Young Justice because Netflix keeps track of the views a show gets. If all the fans binge watch on an ongoing basis — they can turn it on and go do the laundry, I don’t care — that registers for Netflix. Netflix says, “Our subscribers like Young Justice, maybe we should do more”. It also registers for Warner Bros.

The third is to buy e-versions of the comic for Kindle or iPad or whatever on comiXology. We have 26 issues of the companion Young Justice comic which are in continuity. Has the same time stamps. You can figure out exactly where these stories fall. Most of them were written by me and they’re all canon. If you buy on comiXology that’s putting money in DC Comics’ pocket which means DC Comics — DC doesn’t own the show but the characters — will turn around and say “This book is doing really well. Wouldn’t it be great if we did more?”

Those are the three I am advocating over and over again that people use to bring the show back. What they want to see is fans voting with their wallets.

Theoretically speaking, say that all works. How hard would it be to reassemble the cast and crew for Young Justice? I interviewed Jay Oliva who directed many episodes and he said it would be difficult to get the band back together, so to speak.

Getting the entire voice cast back is easy. Start there. Easy.

On production, you’ve got three key personnel from my point of view: myself, Brandon Vietti, and character designer Phil Bourassa. Those are the three essential people in addition to the cast you’d absolutely need to get back. I talked to Brandon and Phil, who still works at Warner Bros. All three of us have agreed, for Young Justice we’d find a way to make it happen.

Then we assemble crew. Would it be the exact people who were on the crew the first two seasons? That’s not possible because the crew of Season 1 wasn’t the exact same for Season 2. Yet, I don’t think everybody is looking at Season 2 and going, “Oh, that’s different.” We had different directors on Season 2 than Season 1. We still had those three key people.

I don’t want to say that doesn’t matter, because it matters, but it doesn’t matter. The main creative voices were myself, Brandon, and Phil. I think we could get most, if not all of the writers back. If not, we’d get by.

Let’s talk your career for a bit. Besides Young Justice you also made Gargoyles, another cult show some feel had the rug pulled underneath it too soon. Based on that, do you feel jaded about trying to bring back Young Justice? Is it a case of, “I’ve been here before, and lemme tell you…”?

I don’t think Young Justice got the rug pulled out from under it. I don’t think Gargoyles got the rug pulled out. We had 65 episodes of Gargoyles, assuming you don’t count The Goliath Chronicles, which I don’t. 46 episodes of Young Justice. Where we done? Hell no, we weren’t done. We knew even on the first season we might not get Season 2. You always know you might not get a subsequent season.

We wrote each season what we call “open ended closure”. If it ended there was closure for the plot but we left teasers for what might come. We did that on purpose so we could do more. We didn’t do it so that we had to have more. I want Young Justice to come back. Pretty much every show I’ve ever produced I’d like to come back. If they don’t that doesn’t mean I’m not proud of them.

If they’re one of my shows, they’re never going to get 100 percent closure. People have written me, “We got to a third season so you can end it.” I’m never going to end it. If they give me ten seasons of Young Justice? Brandon and I would not end it. We’d give closure but we would not end it because life doesn’t end. Unless you’re literally destroying the universe, which might be a downer, life goes on. Even if you kill off a character, life goes on. There is no end.

It’s been kind of awhile since Young Justice Season 2 became available. Would you happen to know how it’s doing or what waves the efforts have made thus far?

I’ll divulge everything I know which is nothing. I know nothing. People have the impression I somehow got inside information. What I’m offering up is not inside information. What I’m offering up is a pragmatic strategy for the show. I believe sincerely, this is a workable strategy. This isn’t pie in the sky, where I’m saying “Hey do this! Probably won’t work, but do it anyway!” I actually think it could work. I legitimately believe it. I have no idea if we are close.

Someone at one point tweeted and it went around saying “This is the week! We have to binge this week.” I read that and I was like, what’s magical about this week? On one level it was successful. They got all these people to binge, it began trending on Netflix which it has a few times. That’s great. Then the week ended and everyone turned and said, “Did we do it? Did we win?” I’m like, “What makes you think last week was important?” I don’t understand where that came from. What’s important is to do it on an ongoing basis.

On Twitter, the hashtag #RenewYoungJustice is very sweet. I like it. It’s useless. It’s like a petition. It’s something fans do for themselves but it doesn’t reach Netflix. It doesn’t reach Warner. It doesn’t mean anything. When a fan says #RenewYoungJustice, who is that addressed to? That’s why the hashtag I keep pushing is #KeepBingingYJ because is a call to action. It’s not vague, “Please renew it” which isn’t attached to financial reality. If you “Keep binging YJ” they’re going to take notice. They’ve already taken notice, that much is clear.