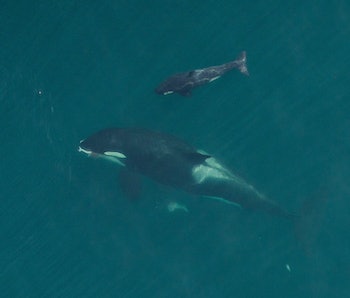 Depending on who you ask, the proliferation of cheap drones is either great or the worst. Whales, seals, and dolphins might give a similar response.

See, there are lots of good reasons why spying on marine mammals from above is a good thing. For scientists, drones offer a cheaper way to collect more, better data. Footage of killer whales taken from above, for example, is detailed enough to identify individual animals, measure how well-fed they are, and if they’re pregnant.

This sort of data is terribly valuable, and beats out other ways of monitoring whales by a wide margin. You can’t observe orcas very closely by boat, and flying planes and helicopters overhead is costly for the researcher and a nuisance for the animals. Tagging is invasive and is limited in the sort of information it can provide. But a drone with a decent camera can fly over a pod, high enough to not be noticed, but close enough to collect detailed images.

But of course, there’s a dark side to how cheap it is to use drones to spy on wildlife. California’s Monterey Bay National Marine Sanctuary, for example, has seen a proliferation of amateur footage of sea creatures, despite there being a ban on motorized aircraft flying under 1,000 feet along most of the coast. “We’ve seen an explosion of this kind of activity,” superintendent Paul Michel told The Tribune in San Luis Obispo, California. “As the drones got cheaper, more and more people got them.”

The above footage shows a drone getting right up in the face of two seal pups. The uploader says the pup was trying to make friends with the drone, but it looks more like the little guy is scared out its skin. Even if the seals weren’t upset by the buzzing presence, any interaction that causes wildlife to become accustomed to humans and human-made things is potentially harmful to them, as it disrupts the natural behaviors they rely on for survival.

The presence of unmanned aerial vehicles can freak out the animals, causing elevated heart rates and potentially interfering with feeding and other behavior. One study of bears and drones found that the animals’ heart beats jumped as much as 400 percent, even though they did not visibly appear to react to the presence of the UAVs.

With whales, dolphins, and seals, if you get too close to them with drones, you’re guilty of harassing them, which is illegal under the Marine Mammal Protection Act.

Of course, the definition of harassment-by-drone is fuzzy. Basically if the animal reacts to the presence of the drone by, say, jumping from shore to sea or changing its swimming direction, you know you’ve crossed the line. But you can be found guilty even if you’re close enough to potentially cause a reaction. The rule is to stay far enough away that you’re pretty sure the animal won’t even notice you’re there, like a slightly noisy bird just passing by overhead. A smaller, quieter drone is a good thing, but a more powerful camera lens that can capture footage from a distance is better.

Not all amateur drone-flying for the purpose of spying on whales and seals is a bad thing. In fact, the more people get interested in wildlife viewing, the more they’re interested in protecting those animals. Coastal tourism can provide a local economic incentive to protect sea creatures in parts of the world where environmental regulations are not strong.

So, please, take your drone to the beach and get that viral video. Just make sure the local regulations allow you to fly, and, more importantly, you’re not being a dick to the animals.

More like this
Innovation
8.15.2022 8:30 PM
This high-tech camera may help protect our identities — here's how it works
By Molly Glick
Science
8.11.2022 5:00 PM
Look: A deep-sea expedition just captured these incredible views of life underwater
By Jennifer Walter
Innovation
8.11.2022 11:00 AM
“Quantum materials” could give the human brain a run for its money, scientists say
By Nathaniel Scharping
Related Tags
Share: