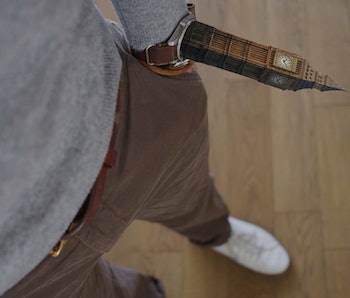 As we all know, the internet is not a safe place today. The following should help you avoid any landmines as you navigate the world of regrettable April 1 decisions various #brands insist on making each year. These are ranked from Worst to — why not? — Most-Worst, meaning we’re starting with the boring ones and working our way up to War of the Worlds-type stuff that actually caused harm.

The Model W. This is dumb.

So eHarmony is bringing us … aHarmony … a dating site for animals. I guess. Sorry, eHarmony, the crown in this genre has already been awarded.

Apple kind of phoned it in this year. This is not a prank. This is just a pirate flag.

“Make any photo look like an Ansel Adams masterpiece.” Adobe is here to make my photography minor more worthless than it already is.

Lyft wants to help you outsource your pranks? The company introduced “Prank Mode,” wherein one can request a prank be played on nearby friends.

The OpenTable app will now let you lick photos before you book a reservation. We’ve all thought it.

Still getting used to the idea of self-driving cars, now we must contend with selfie-driving, in which an app uses your selfie to match you to the perfect Zipcar. Not cool.

Introducing Gruber, a combination food-delivery/ride-sharing service. The future is now, or something.

Mark Zuckerberg, fashion maven, brings us his collection with H&M. (Tag line: “One less thing to think about in the morning.”) Seven basic grey T-shirts, one basic pair of jeans. #MarkForHM. To quote Marshall Eriksen from How I Met Your Mother: “Obvious, yet delightful.”

Ah, Netflix. The company that brought us such essentials as not one but three “Fireside For Your Home” variations has now introduced a category devoted entirely to John Stamos and what he thinks you should be watching. Netflix knows what ails you. Netflix knows what you need.

T-Mobile claims to be “saving your data and your health, one binge-watcher at a time” with Binge On, a hands-free headset sort of reminiscent of dental headgear. Binge On claims to save us from such hazards and afflictions as Distracted Walking, Netflix Neck, and Watcher’s Elbow. (Kicker: “We care, because AT&T and Verizon don’t.)

Were you guys ever totally sure what the Internet of Things was? Oh, you were. Okay me too. Anyway, now we also have the Internet of Trousers, boasting such features as Wi-Fly, Get Up! Alert, Keep-Your-Pants-On Mode, and Fridge Lock. These actually all seem pretty reasonable.

TBH, the fact that this is not real is kind of a bummer. Zoosk toyed with our emotions today by teasing Burrit-OH!, an app that would match you to your One True Burrito.

Experience reality with Google Cardboard Plastic: “Technology that’s as powerful as you are. But not any more powerful than that.”

Google Express will now accomplish same-day delivery via parachute. (“The future of home delivery arrives today. From above.”)

Okay, Google did a bunch of stuff:

This “Drop Mic” thing?. Not fun. Not cool. Google also tried its hand today at Gmail “Smart Reply” emoji and allowing Google Maps to guide you to Funky Town, plus literally too much other stuff to even bother linking to. Google tried the most, failed the hardest.