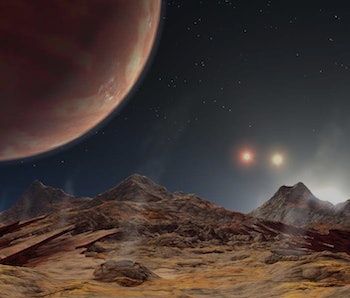 About 680 light-years from Earth lies a planet orbiting three stars. Three. Different. Stars. Astronomers from the Harvard-Smithsonian Center for Astrophysics have just detailed their findings in the Astronomical Journal, describing how they’ve now come to realize a star once thought to be a single star, and then a binary star, is actually a binary star orbiting around another star. And in the midst of this strange three-legged system, a planet the size of Jupiter is floating by in relative peace.

Overall, this is just the fourth discovery ever of a triple-star system with a planet. Although rare, the findings are an encouraging sign that this phenomenon — and other like it — are more common than we think.

The objects in question are part of the KELT system. For several years, scientists thought the binary stars, KELT-B and C, were just one star. The researchers of the latest study discovery used a pair of robotic telescopes part of the Kilodegree Extremely Little Telescope (located in Arizona and South Africa) to identify that B and C were in reality two stars. They then found that these two stars, which orbit one-another roughly every 30 years, were also in orbit around a bigger and brighter star: KELT-A, which is thought be about 40 times as big as our sun.

But then the plot thickened when the researchers found out there was another object: the planet KELT-4Ab, which orbits just around the primary A star. The B-C star pairing actually travels around KELT-A and KELT-4Ab in a 4,000 year orbit.

KELT-4Ab is actually what we call a “hot Jupiter”, a massive, gaseous planet that usually exhibits some pretty violent activity. These planets aren’t really supposed to exist given their incredible size — and yet here we are, discovering quite a few of them around the universe.

Besides just being a really freakin’ cool thing, the new findings about the KELT system could help us to better understand the formation of hot Jupiters and star systems with multiple suns. The chances of these places being habitable are relatively low, but you never know — there might really be a Tatooine or two somewhere out there. Hopefully no Jabba though.