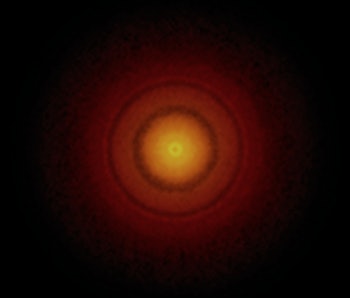 Earth is, statistically speaking, a pretty special place. It might even be a one-in-700-quintillion kind of place. The odds of another planet like it forming are astronomically low (pun fully intended). So it’s pretty exciting that scientists have just found a new planet-forming disk around a star that’s eerily similar to the sun. In fact, the two objects are about the same distance from one-another as Earth is from the sun.

Put another way: Astronomers may be watching a planet very similar to Earth being born just 175 light-years away.

According to findings reported in Astrophysical Journal Letters this week, the star known as TW Hydrae might have something of a “super-Earth” planet forming around it. Astronomers love TW Hydrae because of how close it is to us, and it maintains a pretty unobscured view.

Using the Atacama Large Millimeter/submillimeter Array (ALMA) in northern Chile, an international team of scientists observed the large protoplanetary disk of dust and gas coalescing around the star, and found hints that a planet is indeed forming in that mess of interstellar rubble. Using ALMA, the team snapped up an insanely detailed image of the disk at play.

“TW Hydrae is quite special. It is the nearest known protoplanetary disk to Earth and it may closely resemble our Solar System when it was only 10 million years old,” said study co-author David Wilner of the Harvard-Smithsonian Center for Astrophysics, in a statement.

Beyond this one disk, the rest of the star’s system is showing signs of good growth. There are other features showing up at three billion and six billion kilometers out — similar distance to Uranus and Pluto. So if we’re lucky, we might actually be getting Solar System 2.0 over the next several billion years.