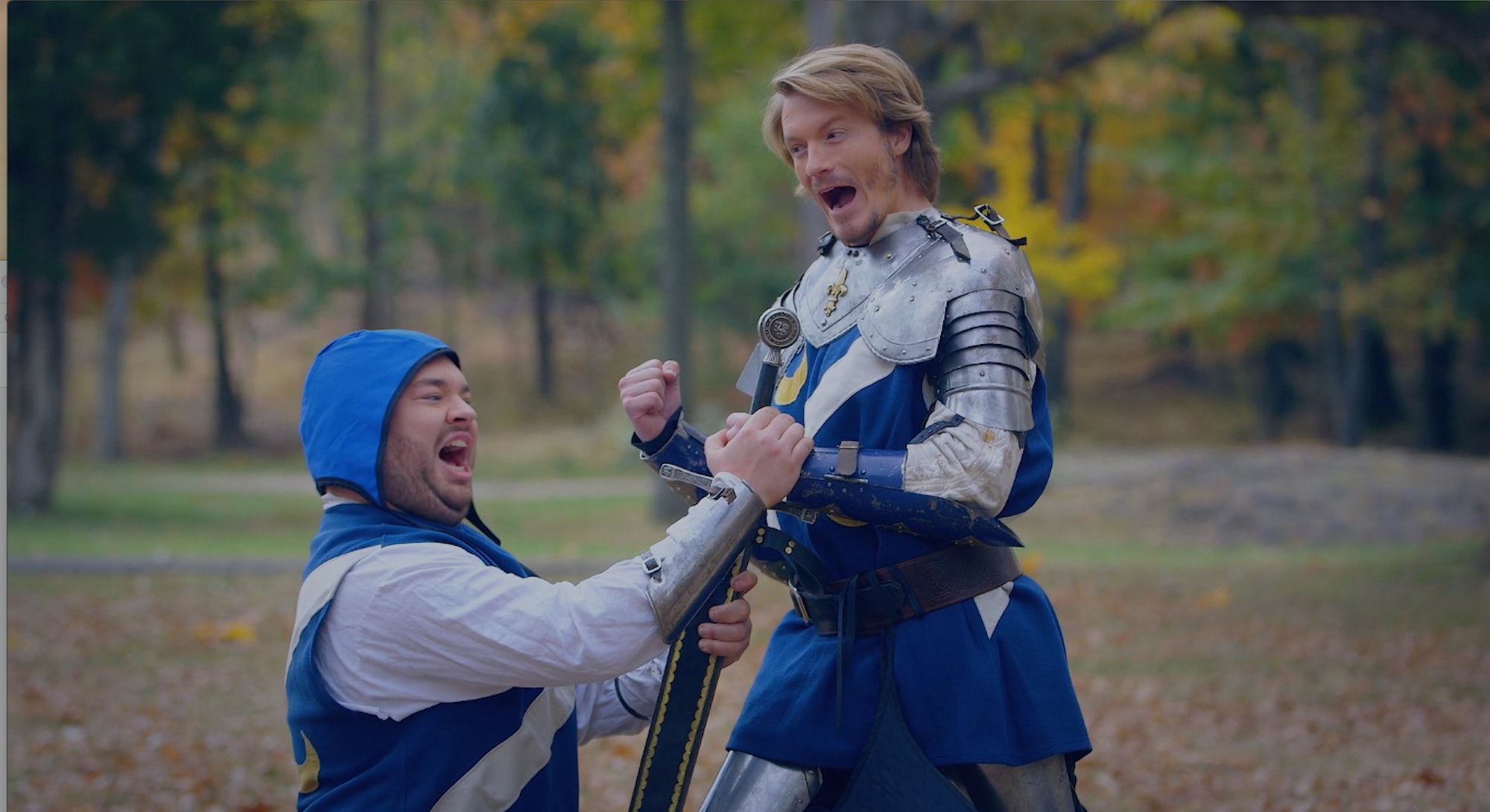 New Jersey is the armpit of America. I can say that because it’s my home. If you don’t believe me, then meet me at the Menlo Park food court where the giant blocks used to be. Bring two Fat Darrells from the Grease Trucks and we’ll see who’s more Jersey.

My home state of Springsteen and pork rolls also belongs to Michael Hadley, the filmmaker behind the new comedy webseries Knights of New Jersey about courageous Joes employed at a summer Renaissance faire somewhere off the parkway. A lampoon and a love letter to geek culture and the Garden State, Knights of New Jersey is like The Office but with swords, turkey legs, and obnoxious Game of Thrones role-players.

“New Jersey, like it or not, has a reputation,” Hadley tells Inverse over the phone. “It’s easy to poke fun at New Jersey, maybe because it’s so great and everyone is jealous, I don’t know.”

We are great. But we’re also characters, which was Hadley’s hook for a medieval sitcom. “When you think of knights, you think of courage, loyalty, all wonderful qualities. When you think of Jersey, you may not think of those,” he says. “It’s that contrast that’s funny, people who have lofty aspirations who literally want to live in a world there’s courage and a brave heart. Yet, when they leave they have to get on the parkway south and deal with traffic.”

Just before the series entered selection into the Montclair Film Festival and the Wiper Film Festival in New York, Hadley talked to Inverse about the quirks of Renaissance faires in a Comic-Con world, our home state, and why the two make the perfect place for a few laughs.

How did Knights of New Jersey begin? What seed planted the idea of a sitcom about Renn faires?

I was always intrigued by the people who put [Renaissance faires] together. I don’t have a huge background, I’m kind of an interested observer. I grew up in Rhode Island, we would go to Renaissance faires in that area. It wasn’t until I started having kids that I gave myself permission to start going again.

[Then] one of my sons had a birthday party to Medieval Times. Off Route 3, not far where I live, in Rutherford. That was the seed, professional people play acting. It’s a spectacle, it’s cool but kind of silly. That was the inciting incident to thinking about the characters and the scripts initially, and still is, for a film.

Why did you pursue Knights of New Jersey as a web series instead of a movie?

The rise of web video, in particular a series called High Maintenance. You can take an idea and peel it apart, do it in chunks. A web series gave me a new way of thinking about the material. Instead of spending three years trying to develop and sell a script, at the end not even have a film, we could just do it on our own.

Modern Renn faire culture is very layered now, especially from “nerds” going mainstream to new people joining in the fun. What were your impressions of Renn faires and the people who go to them? Who introduced you?

From my friends in the Renn faire community, chief among them Sandy Spano with the New Jersey Renaissance Festival Players, an acting group which is defunct. They validated things I had written based on my own observations or out of my imagination.

I have a lot of feelings towards [that] community, I’m in awe of them. What they do is terrific, it’s fun and funny. All those threads combined into this, what would it be like to work at a Renaissance faire and live that life. Regardless of scenario or environment, people are people. They have goals, desires, obstacles. Just because you’re in a “magical” environment doesn’t mean reality goes away. All the emotions, politics [enter] fantasy, so to speak.

I’m familiar with faires, I go to the New York Renn Faire in Tuxedo Park every summer. But I’ve never worked at one, so what do you mean by politics?

It’s true. Faires have a very political organization. There is a Queen, a mayor, and it breaks down from there. The folks that toil in the trenches are looking to work their way up the ladder to become literally royalty. Down from that you have the knights, the ladies. You have street performers. You have folks just starting out. Any organization, you learn the ropes and work your way up. It does parallel the social strata they’re trying to emulate, which I think is fascinating.

What did you expect the response would be from hardcore Renn Faire fans?

I was worried some might take umbrage. The opposite was true. There were some technical details they helped sharpen but they appreciated being treated like real people, good and bad. When I showed it to Sandy and a few other folks, their response was positive. I felt like, “Okay, we can get the community behind us.” We needed their support to help create this picture of their community.

Where did you shoot? I recognize several shots from the New York faire.

The New York Renaissance Faire in Tuxedo Park is fantastic. We worked with their press office, got fabulous shots of their operation for B-roll. We also shot at the annual faire in Wrightstown, PA. Unfortunately, production was out of sync with the New Jersey faires due to vagaries. We had to be clever and intercut B-roll with locations that emulate the look you would find at a Renn faire. We shot at two castles here in New Jersey.

Wait, we have castles?!

Obviously, they’re not medieval. They were built in the 1900s by industrialists who amassed land and had a fancy for the European way. One was in Patterson, Lambert Tower, owned by the parks department in Passaic County. Similarly, in Verona there’s a castle called Kips Castle we obtained permission and shot as well. We had a fantastic crew of Renn faire extras who brought multiple costumes so we could have them change and cycle through scenes. I’m pretty proud of the way it does actually look you’re at a Renaissance faire.

You don’t have a big budget but Knights of New Jersey does look more put together than web shows with DSLRs. What is it that makes the show look head and shoulders above the average YouTube show?

Myself, executive producer Deborah Villarreal, Mike Scully, the DP, sound person Mike O’Brien, the crew, all do that for a living. Everyone is a professional. We have the tools and the technology to make it professional. In front of the camera we were able to get terrific actors. Believe me, without the talent we had it would not be anywhere as near as I think it is. At the end of the day, it was the scripts that drew people in, got them to work for peanuts or nothing.

Very early on Knights of New Jersey takes on hot topics happening in that fandom right now, such as the “invasion” of the Comic-Con type at Renn faires. What made you want to address that so suddenly, with Squire Tom having issues with the Game of Thrones fans?

Just to prove my credibility, I made my own Tribble. I’m a huge Star Trek guy from way back, Lord of the Rings, some of the first films I made were stop-motion, me blowing up Star Trek models I spent weeks trying to put together.

There is a tension between people who have been doing Renn faires for years, who consider themselves authentic, interested in accuracy, in distinction to people that tend to be younger who want to have a great time and if it involves a costume the better. Something I’ve heard people talk about, Renn faires used to be the providence of nerds or geeks. Now, it’s popular. There’s a certain, I would say jealously, of people feeling they’re pushed out. It used to be real geeks and nerds. Now it’s like Sports Illustrated with costumes.

Do you think that’s fair? Personally I think people should enjoy what they want regardless of how long they’ve been around it.

I agree. It will be interesting to see how that works out. At the end of the day these things have a business and getting more people is a good thing. But it does generate tension, which is what we were tapping into with Squire Tom’s resentment, hopefully in a funny way. He just likes to be front and center. I’m also a huge Game of Thrones fan. I thought it would be fun [but] I had no agenda other than trying to show the complexity these characters have.