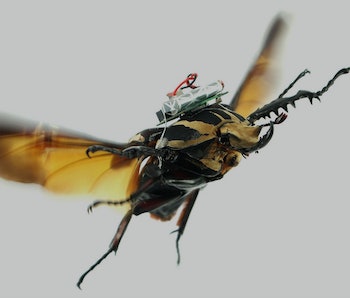 The age of cyborg insects has arrived. By inserting electrodes into the legs of the Mecynorrhina torquata beetle and equipping it with a tiny microchip backpack, a team of researchers at the University of California Berkeley and Nanyang Technological University have turned the insect into a remote-controlled robot — mimicking what nature’s parasites have perfected over millennia.

Anyone who’s ever watched Planet Earth will remember the Jedi-level mind control abilities of the killer fungus Cordyceps. Spores of the parasitic “Zombie ant fungus” infect unsuspecting insects and thereby take over their brains; their hosts, unable to control their own movements, march helplessly away into seclusion. Its host isolated, the fungus, lets loose, bursting forth through the insect’s head and releasing a new round of spores, kicking off the cycle of zombification once again.

And then there’s the womb-snatching, gender-bending castrator barnacle, which forces female crabs to carry its larvae (and, if it happens to infect a male, casually coerces it into switching sex). Or the bloodsucking zombie emerald cockroach wasp, which stings its cockroach host with mind-controlling neurotransmitters, gets a good suck of its blood, leads it to its wasp nest, then — as if it couldn’t get any more savage — lays its eggs on the zombie roach’s chest, walling it in with pebbles so it can’t escape. Nature is full of mind controllers. Humans are just late to the game.

With their cyborg beetle, all the researchers really did was recreate natural mechanisms through artificial means. Publishing in the Journal of the Royal Society Interface, the researchers explain how they use electric impulses, transmitted from the microchip backpack down through the leg electrodes, to control the insect’s walking gait, step length, and walking speed. It’s a lot like the way nature’s parasites take over the minds of their hosts, only less dark; once the researchers removed the electrodes from the beetles’ legs, the insects went back to living normal beetle lives.

In the natural world, parasitic mind control evolved as a means for survival. The cordyceps fungus, castrator barnacle, and emerald cockroach wasp simply need platforms for propagating; it just so happens that the living bodies of its fellow beings provide the best conditions for doing so.

We don’t need to take over beetle bodies to propagate species. Though they take their inspiration from nature, the cyborg beetle’s creators — essentially parasites themselves — aren’t driven by reproduction. They’re looking to apply their robotic insect technology to strictly human-centered endeavors — namely, drones. As they write in their paper, “[U]nlike man-made legged robots for which many tiny parts, sensors and actuators are manufactured, assembled and integrated, the insect–computer hybrid robots directly use living insects as Nature’s ready-made robot platforms.” Insects, like the mechanism of mind control, may have been devised by nature, but they’re ultimately ours for the taking.