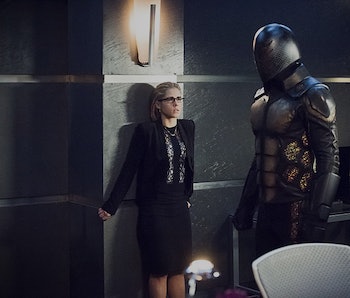 This week’s episode of Arrow, “Beacon of Hope,” bustled with activity: Curtis Holt (Echo Kellum) finally learned Oliver Queen (Stephen Amell) is the Green Arrow, guest star Emily Kinney (Hey, The Walking Dead fans, it’s Beth!) reprised her role as the the Bug-Eyed Bandit/Brie Larvan from The Flash, yielding a brisk, fun hour of superhero TV when nothing particularly significant happened. It didn’t break any new ground, but it was certainly a lot more than Arrow has been most of this season.

“Beacon of Hope” sets up a hostage scenario quickly. The Bug-Eyed Bandit holds the Palmer Tech board, plus and Felicity (Emily Bett Rickards), her mother Donna (Charlotte Ross) and even Thea (Willa Holland) trapped in the building, Thea without her Speedy gear. Brie wants Felicity’s experimental spinal cure technology, and she’ll take it by any means necessary. The sting of Oliver and Felicity’s canceled engagement is still fresh, so it’s not easy for Green Arrow to come to the rescue.

It’s been awhile since Arrow had a hunky/sexy training montage. With all the recent expansions to the team, there have been many missed opportunities for some shirtless salmon-ladder goodness. It’s also been awhile since Arrow has been genuinely funny — it seems like the CW-verse’s sense of humor is trapped in Central City with The Flash. So Oliver’s hysterical attempt to prove his pop culture awareness was a welcome diversion from his usual broody, no-fun face. “There were movies?” he asks of Harry Potter. If only he had time to binge-watch.

Amid the chaos, Curtis — almost too easily — finds the Arrow Cave, and discovers Oliver’s identity. It was bound to happen sooner than later, but like most of the major plot developments this season, it happens long after it should have. Curtis (destined to become Mister Terrific, maybe next season?) replaces Felicity, at first briefly to rescue her, but we might see more of him behind the keyboard if Felicity’s leave of absence becomes permanent. That is, if Oliver doesn’t scare him away. Curtis has yet to understand the gravity of the Green Arrow’s crusade, and Oliver doesn’t go easy on him. Kellum and Amell share one of one of the most tense, cruel, and compelling scenes in recent show memory.

If only the rest of the episode were as rich as that scene. While “Beacon of Hope” is not necessarily bad — in fact, it’s better than most recent episodes — it flies along too quickly for any beat to land. Oliver gets infected, and then he’s fine. There’s stuff with Damien Darhk and Malcolm Merlyn, but not enough. Brie is a fun villain with a sympathizable plight (she has a tumor on her spine), but she’s reduced to just plot motivator soon after. She also has her own sentient warrior, somehow? “Beacon of Hope” juggles a lot. Maybe too much.

Arrow is approaching the end of its troubled Season 4, and will need to improve come September for Season 5. “Beacon of Hope” is, in fact, Arrow’s beacon of hope. All is lost, but it’s too easy for hope to dash away.