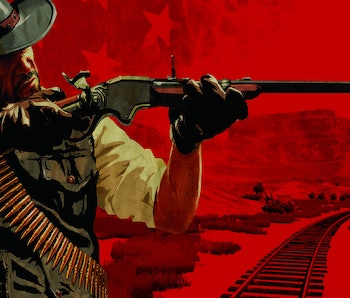 A few days ago, various outlets began to post wonderful, unconfirmed rumors that Rockstar Games is set to return to the old West with a sequel of sorts to its sprawling masterpiece, Red Dead Redemption.

The suggestion of a new entry to the series sent gamers into a tizzy, regardless of the fact that said rumor is almost definitely fake. Of course, mere fact can’t completely diminish gamers’ hope of another romp in Rockstar’s West. And there’s good reason for that.

Released in 2010, Red Dead Redemption launched to almost universal praise from both critics and players alike. Among the many reasons to love Rockstar’s cowboy tale was its protagonist, John Marston, a man searching for peace he isn’t sure he deserves. Of course, those who’ve played the game know that peace never truly arrives for Marston, as a boatload of fresh bullet holes is his reward for a job well done.

He’s tough, he’s gritty, and he’s stampeding towards self-destruction. What’s not to love? Of course, the reason Red Dead Redemption stands the test of time is its serious emotional punch, a trick the game pulls off due to, in large part, some of the earliest stories ever told. You see, John Marston is a tragic hero of the old(est) school.

A Brief Dip Into Classical Matters

Before we talk about what makes Marston the perfect tragic hero, we have to know what exactly a tragic hero is. According to Aristotle, a guy who would know, the tragic hero is, “a person who must evoke a sense of pity and fear in the audience. He is considered a man of misfortune that comes to him through error of judgment.”

Of course, ever the pedant, Aristotle explained that every proper tragic hero should possess seven key qualities. Aristotle’s guidelines paint the tragic hero as someone who ruins themselves because of their initial belief that they are in complete control of their own destiny.

OG Greek playwrights loved to talk about how fate was out to get us, but they also believed the mankind brought that destruction on itself. It’s pretty complex shit. Of course, in the case of John Marston, that couldn’t be more true.

A Man Against Fate

When the game opens, Marston is a stoic man on a grim mission. His family has been kidnapped by government goons and he’s been sent to capture, or kill, his old running buddies. Through his dialogue, we learn that he believes fate has total control over his life. He explains to his wife in a flashback, “Some trees flourish, others die. Some cattle grow strong, others are taken by wolves. Some men are born rich enough and dumb enough to enjoy their lives. Ain’t nothing fair. You know that.”

That’s a pretty fatalist point of view. However, John’s actions throughout the game run directly concurrent to that espoused philosophy. After all, he’s perpetually moving forward, fulfilling his part of the bargain with the government by capturing or killing the members of his old gang. These are not the actions of a man who’s accepted his fate, regardless of his professed belief that “People don’t forget. Nothing gets forgiven.”

However correct that supposition ends up being, that Marston has rendered himself beyond salvation even before the game begins, the outlaw spends countless in-game hours battling against that inevitability. Though he’s ultimately doomed by his own initial sins, Marston still believes himself powerful enough to outmaneuver the machinations of fate.

The End of An Era

When the opening credits roll in 1911, before we even see the cowboy protagonist with whom we’ll spend the next 40 or so hours, we see this:

It’s a car being unloaded on a rural dock to the ooh’s an aah’s of an enthralled crowd. The car, in this setting, is a new machine: the sign of a burgeoning civilization. Immediately juxtaposed with that fine machine is our first shot of Marston, accompanied by two men in black suits. Marston immediately sticks out. He’s dirty, and his clothes are markedly different from the crowds milling around on the dock.

In order to drive his isolation home, the game begins by putting Marston in what probably amounts to his own, personal Hell: a lengthy train ride heading out to the countryside. He’s a grizzled, battered, dirty man who’s literally surrounded by encroaching civilization.

There’s the preacher in the foreground speaking to an eager disciple, and the two harping old ladies in the background commenting about “savages” and the like. And then, there’s John, arms stretched in apparent comfort, his eyes wary and unsettled, staring straight out at the camera. Here’s a man who’s operating in a world that’s changing before his very eyes. He’s a relic of the past, and he knows it.

As he says of his son������������������s’ future, “He ain’t gonna to be no frontier gunslinger, killing and running in no gang though. That way’s over. Railroads and government and motor cars and everything gone and done away with all of that.”

In other words, society has gone and done away with men like John. It’s the uncontrollable forward march of time that sends the cowboy to his inevitable demise.

Though he may deny it, Marston is a man who believes completely in his ability to control the outcome of the game. His actions betray a man of great pride who is intent on setting right the sins of his past. Of course, that’s an impossible mission, manipulated as he is by forces that have zero incentive to reward him.

Marston is a man who long ago sealed his fate, and his ultimately vain attempt to undo that death sentence is crushing on a level that even Oedipus might respect.