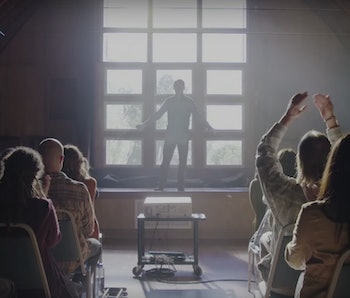 The first two episodes of ‘The Path’ are now streaming on Hulu. What’s happened so far and what do we make of it?

Episode 1: What the Fire Throws

In the first episode, the Meyerist Movement — the show’s fictional cult — gains some new members in the survivors from a disaster in New Hampshire. Most notable among them is Mary Cox (Emma Greenwell) — a woman who seems to take an immediate shine to Cal Roberts (Hugh Dancy), the Movement’s interim leader.

We meet a haunted Eddie Lane (Aaron Paul), who’s doubting his faith in the Meyerist following a mysterious retreat in Peru and some visions courtesy of what we can only assume was a pretty hefty drug cocktail. Eddie’s wife Sarah (Michelle Monaghan) notices his strange behavior — sneaking away to motel rooms, talking in hushed tones on a burner phone — and assumes he’s “transgressed.”

In reality, though, we’re know that Eddie’s investigating his doubts and trying to find the truth behind the Meyerist Movement, which he suspects is not as squeaky clean as it appears to its members. In a public library, Eddie Googes “Is Meyerism real?” which leads him to what looks like a GeoCities website (www.MeyerismLies.com) with a phone number. Eddie purchases a burner phone and texts the number, “What’s The Real Truth?” making it clear that whatever’s going on at the Meyerist Compound, Eddie is afraid that he’s being watched, right down to his Google searches, phone calls and texts.

Later, Cal delivers a stirring speech/sermon at a gathering under the Meyerist Eye in a chapel of sorts. He talks of Plato’s cave and shadows of reality. He talks about what happens when one’s reality is shattered, when they’ve broken free or are unchained — he implores those seated before him: “Let me lead you up.” Eddie, who’s seated before the stage where Cal stands, looks on in stark contrast to those around him. While the others regard Cal with reverence, Eddie is deeply troubled.

In perhaps the best scene of the episode, Eddie meets the truther behind the website at a motel: Alison, who we saw briefly early in the episode as she approached an elderly couple before being scared off by a bunch of Meyerists. Eddie tells her about the vision he had in Peru of his brother, an ominous door and an unconscious Dr. Steven Meyer (the Movement’s founder) covered in a big yellow snake. “Am I going to blow up my life, a life that I love, because of something that I don’t even know if I really saw?” he asks Alison. She responds simply: “I guess so.”

Episode 2: The Era of the Ladder

In Episode 2, we learn more about Alison and the reasons behind her sudden and fraught departure from the Meyerist Movement. Alison is sure that the Meyerists killed her husband and covered it up. She’s been on the run and tried to return to her grandparents, but was intercepted. As she talks to Eddie, her fear and anger are evident.

“Maybe it doesn’t matter if it isn’t real,” Eddie says. “So what if there’s no light, you know?”

Alison rejects the idea outright: “The truth has to matter.”

Eddie and Sarah’s son, Hawk (Kyle Allen), is having a predictably rough time in high school. His involvement with the Movement makes him a target and he wants to leave his education behind to take his formal adult vows to the religion. He tries to help a friend from school who is struggling, ends up eating steak at this friend’s house for dinner even though he’s vegetarian and is very upset about it. When he returns home, he promptly throws up and we discover that the mirror in the bathroom appears to be a two way mirror, leading to a darkened room on the other side. Creepy stuff.

We see more of Cal this episode, too. He’s ambitious and it’s immediately evident that he’s deeply manipulative. Every move he makes and word he says feels calculated, and his interactions with Meyerist members and a rich quasi-member in particular give us a sense that Cal is after power. He demands that in exchange for taking a wealthy man’s son to the compound for a quiet bout of rehab, the man must make his involvement with the Movement very public. “I don’t give a shit about your million dollars,” Cal tells him. “I want your faith.”

Near the end of the episode, we find Eddie “in-house” for a 14-day at the recommendation of the Infidelity Rehab Program (IRB) that Sarah insisted she and Eddie go through. We’re treated to a sort of madness montage in which Eddie circles the small cell-like room, answer questions posed by the IRB counselor. More flashbacks from Eddie’s visions in Peru surface and finally, Eddie “confesses” to sleeping with Miranda Frank (Minka Kelly).

The episode ends with Cal in Cuzco, Peru at the bedside of Dr. Steven Meyer, though there’s no snake this time. It turns out that what Eddie saw was real after all.

The first two episodes of The Path are, overall, pretty effective and efficient. Though there are moments that suffer from too much hand-holding, for the most part the show gives the audience some credit, allowing us to follow it down the rabbit hole without stopping to explain too terribly often.

That said, there are moments during which things move a bit too slowly. We can feel that things are about to go downhill very quickly as the truth behind the Meyerist Movement comes to light, but as the plot sticks and stalls in places, it leaves us wishing it would hurry up and get to the bad shit already.

Furthermore, the show struggles with a little bit of “why should I care?” syndrome and a fair amount of disjointedness. It sometimes feels as though we’re thrown into scenes that we’re supposed to care about, but haven’t been given quite enough of the story to feel invested. Hawk promises to be an instrumental part of the show, but for now we’ve only had glimpses of him and its difficult to feel a real connection with his arc and its place in the story just yet.

The same goes for Mary, who has all the trappings of one of the series most interesting characters, but her scenes feel somewhat disconnected from the rest of the plot. We’re left wondering why we’re following her and when she’s going to have an impact on what seems to be the central storyline.

The show’s biggest asset so far is its characters, and the cast is tremendous. Aaron Paul is, as we might expect, intensely layered and illuminating as Eddie. Perhaps one of the most surprising elements so far is Sarah Lane’s Alison, who’s sharp and biting and a stark contrast to the Meyerists. We get the feeling that she’s going to be instrumental in Eddie’s search for the truth if he’ll let her help.

In the coming episodes, The Path will have to pick up the pace to keep viewers on board, but the characters make this a compelling two-episode premiere. Episode 3 will be available next week on Hulu.