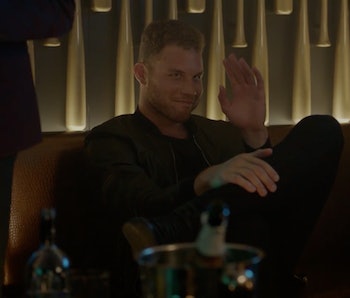 In Wednesday night’s episode of Broad City “B&B-NYC,” Ilana and Abbi discover the lucrative possibilities of participating in a lodging service like Airbnb. Once Abbi and Ilana realize how much they can overcharge their potential guests ($700 per night), they decide to both put their apartments up on the site and camp out on the roof of Ilana’s building.

This proves to be a bad idea, as their tent blows off the roof after a gust of wind carries it away, necessitating a search for somewhere else to stay. They don’t have many friends to call up, so they decide to stay out all night until 11 am when their subletters are expected to leave.

They weasel their way into a nightclub, where Ilana meets NBA star Blake Griffin. Ilana goes home with Griffin, where the two sexually experiment in ways that expand Ilana’s mind. Ilana is unable to “receive” Griffin, so they engage in other types of foreplay: Ilana licks the entirety of his wingspan, they stretch together, she rides on his back like a horse, they sip tea together, and they finish the night out by eating pizza in bed together wearing each others’ shoes. Abbi, who has been texting her French subletter since she left him with the keys to her place, misconstrues this communication for flirting, and she goes back to her place to hook up with him. When she gets home, she discovers he’s robbed her. Abbi calls Trey, one of the trainers from her gym, to come over and keep her company because Ilana is busy with Griffin. Abbi and Trey end up hooking up after she makes a bold move.

Broad City loves to exploit the differences in Abbi’s and Ilana’s approaches to getting laid. While Ilana is the straightforward and sexually liberated type who enjoys casual sex and touts open relationships, Abbi is more traditional in her search. She merely wants a sincere and sweet connection with a guy, but she usually goes for super hot ones who make her flustered and nervous. Being robbed by a subletter because she thought he was being flirtatious is just the latest mishap. She’s a hopeless romantic who wants to believe that men are good. In “B&B-NYC,” she finally encounters the man she deserves, although that man happens to be the last person she would expect.

When Trey comes over, he makes sure Abbi is safe by checking all the dark areas of her house and yelling “clear!” He brings DVDs of Hangover 3, Babe, and Ratatouille and his portable DVD player, because he thought ahead and assumed the French guy had stolen Abbi’s laptop. They over art, pulls a pretty sincere laugh out of her, and consoles her when he tells her he’s been robbed three times in New York. Her vapid, fitness-obsessed, former porn star coworker is cast in a totally different light, and she sees this in a moment when she needs it most. It’s safe to say she almost never receives this kind of positive male attention in Broad City.

You might remember that a few episodes ago in “Rat Pack,” Abbi and Trey drunkenly kiss after they consume one too many Kom-booze-chas at the Soulstice staff party. It was a fleeting drunken moment that didn’t seem like it would resurface, but apparently Broad City can dig a little deeper than crass humor and weed jokes. At the end of the night when they’re done talking in “B&B-NYC,” Abbi goes to her bed while Trey stays on the couch. Reeling from Trey’s surprising display of comfort and the site of his chiseled abs as she watches him take off his shirt, she storms back into the room and climbs on top of him topless. It’s actually kind of romantic.

Generally Abbi tries way too hard with guys, and so it’s befuddling that she hasn’t learned a thing or two from her sexually liberated best friend. Then again, that makes Abbi a more relatable character than Ilana, as she is less of a caricature: her anxieties feel familiar, which in turn makes her quite sympathetic. But it has its limits, even for a sitcom. Although Abbi’s averageness is exaggerated for the sake of the show’s comedic appeal, the relentless battering of her character through unending love-related mishaps is enough already. It seems like Broad City picked up on that, too. She deserves a considerate man, and it looks like that’s what she’ll eventually get.