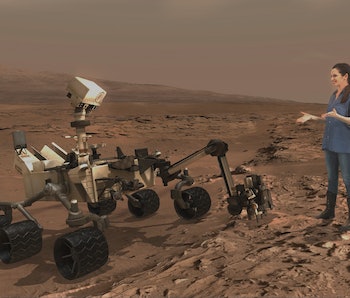 Get NASA representatives and Microsoft employees in a room together and the conversation will turn to technology and its application. That seems to be how “Destination: Mars,” an interactive exhibit launched jointly by the space agency and technology company, came to be. The people from NASA had worked tirelessly to image the planet and the people from Microsoft had worked tirelessly to invent a way to allow people to step into imagery.

For those that don’t know, the Hololens is a mixed reality headset that a user wears to experience virtual elements that interface with one’s actual environment. It merges the physical and the virtual worlds together and creates something entirely new.

In the case of the “Destination: Mars” exhibit, the Hololens will let ordinary people “visit” Mars. The exhibit, opening at NASA’s Kennedy Space Center Visitor Complex in Florida this summer, will take people on guided tours through several sites of Mars reconstructed in a virtual space using real photos taken by NASA’s Curiosity Mars Rover since it landed on Mars in August 2012. Tour guides include the famous Buzz Aldrin and Curiosity driver Erisa Hines.

“This experience lets the public explore Mars in an entirely new way. To walk through the exact landscape that Curiosity is roving across puts its achievements and discoveries into beautiful context,” said Doug Ellison, a visualization producer at NASA’s Jet Propulsion Laboratory, said in a news release.

“Destination: Mars” is actually an adaptation of an old Mars rover software tool called OnSight (not to be confused with the upcoming Mars InSight probe) developed by NASA and Microsoft. OnSight also uses the Hololens to allow scientists to work on Martian research through a virtual environment.

OnSight and “Destination: Mars” are in essence the same thing catered and modified to fit two distinct groups of people — scientists and the general public, respectively. Members of the Curiosity team helped make recommendations as to what sites the exhibit should focus on and how to teach visitors about the details of Martian rock formation and geological features.

The exhibit is just the latest glimpse of NASA’s plans to use mixed reality and virtual reality technologies in a bigger scope moving forward. The agency is currently developing ways to use mixed-reality environments to teach astronauts how to go on a space walk before their missions start, as well as potentially give astronauts some insight as to what Mars or other worlds might look and feel like before we ship them off to those places.