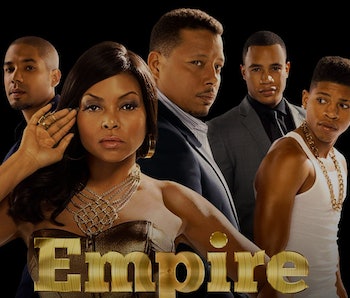 Every member of Empire’s Lyon family — Lucious, Cookie, Andre, Jamal, and Hakeem — has proven to be ruthless, but Empire itself took its gloves off when, this season, it trashed the central plot introduced in the first season. Beginning with its pilot episode, Empire gave Lucious’s intensity an explanation, revealing that he had ALS. Lucious’s ailing health gave the show momentum, and raised the stakes with its central question: which Lyon brother will run the company?

Because everything in the show is theatrical, Empire rejects all realism or raw emotion. Its affection for volume and grandiose conflicts means it can’t waste too much time on introspection or nuance.

The sequence in which Lucious finds out he doesn’t have ALS, and subsequently kicks his doctor out of his house, uses cinematography previously untouched by the show. The shot changes color rapidly, and several shots of Lucious’s face — a maniacal grin spreading slowly — cut into each other sharply. The camera is close to our mogul, and then suddenly back off, all while he stands at the head of his table, laughing. The sequence is camp in its purest form: Lucious doesn’t know we’re laughing at him or the show, but there’s something cartoon-like in his villainy. When Lucious kills Chris Rock’s character, there’s nothing the audience can do but laugh at his brutality.

We see it again; when Lucious gives each of his sons a ridiculous golden token and his wife a pillow. And again, when Lucious realizes Jamal has been invited to perform on a show he’s been hoping to get. Though the other Lyons are more lovable and dynamic than Lucious, he is the center of Empire’s whirling, campy stratosphere. Cookie has her own scenery-chewing bits, but she orbits around her ex-husband the way her sons do, enacting new scenarios and public spectacles in order to embarrass Lucious, threaten Lucious, seduce Lucious or, as she did with the pillow, try to kill Lucious.

That relentless family drama is what makes this show lovely and satisfying. Hakeem’s guerilla performance of “Dynasty” is still his crowning achievement, and the episode framed him in smoke and red light, with Timbaland’s thundering beats under him.

When Jamal changed his father’s lyrics to “this the kind of song that makes a man love a man,” his environment was similarly theatrical, cast in white instead of Hakeem’s red. Only Andre, the eldest and most tragic Lyon, enacts his campy revenge tactics in private, crawling into his father’s recording studio to attempt suicide.

Is there any other way to accept a show whose primary plot points include a father sharing multiple sex partners with two of his sons, or more than one episode involving the secret disposal of a body? What separates Empire from grittier stories about intrigue and power and masculinity — The Sopranos, Breaking Bad, Vinyl, Mad Men — is not a lack of quality, but the tweaking of several artistic knobs. Everything on Empire, from the volume to the aesthetic to the speed through which its characters tear through plot lines, alliances and lovers, has been cranked up to 11 since the first frames.

When we were introduced to Lucious in the studio, we watched him demand a better performance out of one of his many artists. Frustrated, he broke into the studio and reminded the poor girl about her dead brother, instructing to her put those emotions into the song. The result was spine-tingling, and the scene was only watchable if its audience accepted Lucious and his gold-plated, glitter-filled world as an homage to Douglas Sirk’s technicolor interiors, or the quick scene change-ups in The Monkees or Wonder Woman.

If its audience wants to see all three brothers cry together, Empire traps them in an elevator and turns the emergency signal blue, flooding the scene with drama. If the audience needs to see Hakeem taken down a peg, he’s kidnapped by mysterious criminals who appear out of nowhere. The boys love their mother when the show needs a softer note, and they hate her when it hasn’t been loud or violent enough. The show does what it needs to do, much like the Lyons, in order to survive.

Fox’s musical drama Empire will resume its second season on March 30th, and it’s already been renewed for a third season.