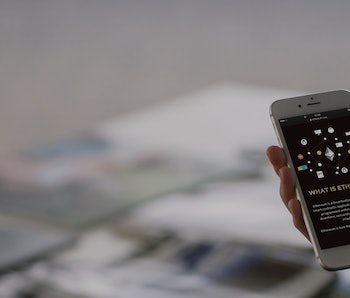 There’s a new digital currency that’s looking to give bitcoin a run for its money: Ethereum. In a sense, it’s an offspring of bitcoin that’s capitalizing on and enriching blockchain technology. Developers and cryptomaniacs around the world are rejoicing about its potential applications. But you can so rejoice, too.

And that’s because it’s not exactly a digital currency. It takes the conceptual basis for bitcoin and makes it applicable to just about anything. Before we get into the deep water, though, you’ll probably need…

A Wee Bit of Background

Ethereum has been in the works since late 2013, when Vitalik Buterin — who’s now just 22 years old — released this Ethereum white paper. About a year later, after fellow hackers joined the venture, Ethereum launched a public crowdsale. In 42 days, Ethereum collected almost 32,000 bitcoin — equivalent to about $18.5 million USD.

Ethereum supports applications that run on its custom-built blockchain. A blockchain, for those who don’t know, is — in effect — an indestructible, public, immutable ledger. An unmodifiable record of what’s happened.

Blockchains are attractive because they decentralize. Instead of one person or institution running the system — i.e. a bank, or Apple, or Facebook — the blockchain involves and empowers all users in both its creation and supervision. By distributing the computational burden, you’re decentralizing.

“Ethereum aims to take the promise of decentralization, openness and security that is at the core of blockchain technology and brings it to almost anything that can be computed.”

Applications that run on Ethereum’s decentralized, blockchain-based platform enjoy more than just those benefits, though. A blockchain precludes downtime, censorship, and third-party interference. Ethereum wants its platform to decentralize and therefore improve the trustworthiness of all possible transactions — social networks, medical information, and even, one day, governance. Anything that can be computed can become a decentralized Ethereum application. The creators have unveiled the monolith. It’s up to developers to figure out how best to put it to work.

George Hallam, Ethereum’s external relations director, tells Inverse that “Ethereum is essentially a programmable blockchain that puts the user in control. Rather than lock users to a set of pre-defined applications within the protocol, Ethereum allows them to create their own applications in the form of Smart Contracts (DApps), which can be as complex as required. This significantly increases the versatility and capability of the Ethereum blockchain as a whole.”

Why You Should Care About the Ethereum Blockchain

Ethereum cuts out the middlemen involved in all transactions, whether that transaction relies on money or not. In an idealistically Ethereum-powered world, there’d be no central bank taking percentages off each card swipe, there’d be no individual person deciding what’s content and what’s not, there’d be no Uber cutting rates on its drivers. There’d be very little bureaucracy.

Since Ethereum is powered by thousands upon thousands of nodes (crudely, a node is a computer connected to the Ethereum network), it won’t ever crash, can’t be censored, and isn’t open to fraud or interference.

But can you trust Ethereum? you might ask, dubious. In a sense, “trust” doesn’t even apply: since the network — the blockchain — is maintained and surveilled by all users by virtue of their participation, there’s no individual person or organization in whom or in which you must place your trust. And, likewise, there’s no individual person or organization whose sabotage can spell catastrophe.

Don’t (Just) Call it a Cryptocurrency

Ethereum’s creators themselves don’t refer to it as a “cryptocurrency.” Ethereum is a shared computing platform, and its base unit is ether, the “cryptofuel” that powers the network: “a token whose purpose is to pay for computation, and is not intended to be used as or considered a currency, asset, share or anything else.”

So ether pays for computation. This computation takes place within the Ethereum Virtual Machine; the EVM makes it possible for smart contracts to run on Ethereum’s blockchain. Were these computations free, Hallam says, “Ethereum solves the Halting Problem, where users could potentially write infinite loops into their smart contracts, thus using up all of the platforms available resources (similar to a traditional DDoS attack on a website). By putting a price on computation, infinite loops would require an infinite amount of Ether, making such an attack impossible.”

But these tokens — ether — are still both exchangeable and valuable, so are, in a sense, a currency. You can own ether, you can spend ether. (“Ether” is both singular and plural.) Ether can be “mined,” like bitcoin, using a network of powerful computers. 1 ETH, at time of writing, is worth around $12 USD. You can watch the “etherchain” update live, here, to get a better conceptual sense of how it works and how often “miners” strike “ether.”

How Ethereum Is Already Changing the Game

Safe to say that old-hat institutions that are accustomed to and continue to benefit from centralization will not go down without a fight? Not quite. Unlikely corporations are sneaking aboard the bandwagon.

This week in New York City, the Depository Trust & Clearing Corporation is hosting the 2016 Blockchain Symposium. There, attendees will hear from top dogs at IBM, Barclays, Goldman Sachs, Nasdaq, and the U.S. Commodity Futures Trading Commission.

IBM and Samsung have already teamed up to put Ethereum into practice. Together, they made a washing machine that can reorder detergent when the supply is low, call a repairman when it malfunctions, and even do laundry when the electricity is cheapest. R3, a financial consortium, is also running several experiments with Ethereum.

More and more companies may start to see the benefit of Ethereum. By eliminating the need for a middleman, costs and fees drop. Uber collects a significant percentage of every transaction, for instance — and often to the detriment of the driver. With Ethereum, these collections could be eliminated via smart contracts,” or “decentralized apps.” These so-called DApps are already impressive in number. We’ll keep up with these decentralized apps as they get more and more exciting in the days and months to come.

More like this
Gaming
8.11.2022 1:30 PM
Overwatch 2 is ditching the game industry's worst feature
By Willa Rowe
Innovation
8.10.2022 9:00 AM
Scientists may have revealed the ancient secret behind China’s Bronze Age
By Sarah Wells
Entertainment
8.7.2022 10:30 AM
Rings of Power clip sets up an epic Sauron moment Tolkien fans will love
By Alex Welch
Related Tags
Share: