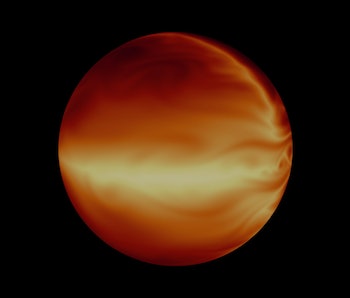 About 190 light years from Earth, in the constellation Ursa Major, lies a gas giant named HD 80606 b. It’s a giant — comparable size to Jupiter — yet four times its mass. It also possesses a pretty bizarre orbit, which is actually not an uncommon trait among many kinds of exoplanets hanging around in nearby and distant planetary systems. But this particular “hot Jupiter” sometimes sidles up close to its host star. Too close, really. Scientists from around the country have been studying HD 80606 b for quite some time, and they’ve found that this journey can result in scorching activity that can boil up surface temperatures to around 2,000 degrees Fahrenheit.

In findings published in the newest issue of Astrophysical Journal Letters, a team of astronomers from the Massachusetts Institute of Technology, the Space Telescope Science Institute, and the University of California-Santa Cruz, among others, have found that HD 80606 b spends nearly 100 days of its orbit on an oblong track that brings it near and dear to its host star.

In the 20-hour span where its sweeps around the star, the planet is inundated with an insane amount of heat and energy — a thousand times more powerful than what the Earth gets from the Sun each day.

In short, the side facing the sun is roasted like an egg on pavement during a hot day in Houston. The son-of-a-bitch just vaporizes. And according to the researchers, it happens every 111 days.

Astronomers stumble upon hot Jupiters seldomly, but there are some ideas as to how exactly they operate. Hot jupiters are thought to form on the outskirts of their initial host stars. Eventually, a larger object (like a planet or moving star) barges in and pushes them off into an eccentric orbit that brings them much closer to the host star. Every time they bypass the star at such close range, the gravity and energy they are exposed to squeezes them up into very dense balls of volatile activity.

“If you take a Nerf ball and squeeze it a bunch of times really fast, you’ll see that it heats up,” said astronomer Greg Laughlin of the University of California-Santa Cruz, co-author of a new study from NASA’s Spitzer Space Telescope that investigates hot Jupiter formation. “That’s because the Nerf ball is good at transferring that mechanical energy into heat. It’s squishy as a result.”

HD 80606 b is currently in the midst of stabilizing into a more circular orbit. This won’t finish for another hundreds of millions of years, however — and some estimates from the researchers think it might take as long as 10 billion years. In the meantime, the planet gets walloped by its star every 111 days by no fault of its own.

Apart from just how cool these new findings are, further observations of HD 80606 b could help lead to a better understanding of how planetary systems take shape. More importantly, this could help scientists figure out how to predict which new planets in the universe could take on shapes and orbits that lead to habitable environments on which life could survive. Reaching a couple thousand degrees every hundred days or so makes it almost certain HD 80606 b is uninhabitable, but hey — who knows what might be going on for another planet out there.