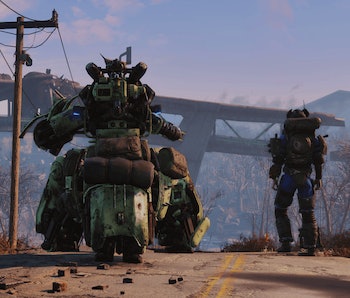 It’s been a few months since players have had a reason to jump back into Fallout 4 following the games release last year and unfortunately the first chunk of downloadable content isn’t everything it could have been.

Going into Automatron I had really high hopes for a piece of downloadable content that could rekindle my interest in the wasteland of Boston. I was looking forward to creating my own robots and seeing one of my favorite characters from Fallout 3 make a return under a new alias – but after playing through the 3-hour long storyline offered by Automatron, I was left wanting more from the experience.

From a story perspective, Automatron doesn’t have much to offer to players outside of a pretty basic character arc. As with all other downloadable content from the Fallout franchise, players will begin the questline after picking up a distress call via their pip-boy radio. You’ll then head over to the origin of the distress call to find a caravan under attack from a horde of rogue robots and befriend the only survivor left from the group: a customized robot named Ada.

Following this point, you’ll be working with Ada to find and stop the Mechanist – the new big baddy this piece of downloadable content is centered around. Unfortunately, the Mechanist doesn’t have much to offer from a character perspective with a disappointing reveal and a shallow history behind the mask. While it was nice to have additional dialogue options and a moral choice for the ending of the DLC, it’s a little disappointing to see this sort of character development in the Fallout franchise considering how deeply the developers tend to flesh out their worlds. After taking down the Mechanist I wanted to learn more and didn’t feel fulfilled. I mean sure, I was given a repeatable quest to hunt down rogue robots - but it didn’t feel substantial in nature.

That said, Automatron does offer plenty of great lore alongside the main storyline – including a fantastic section where the cruel, twisted science of the Fallout universe comes to light. It also introduces a new group of raiders known as the Rust Devils to the Commonwealth, who have a crazed obsession with robots and their own background for players to explore.

Where Automatron is shy on story content, it makes up for with the new robot customization system. Shortly after starting the main quest you’ll get access to the Robot Workbench for your settlements that allows you to construct and modify your own robot companions. At first the pickings are slim and limited to a few different types of robots like the Mr. Handy and the infamous Protectron, but you’ll quickly acquire new parts from scavenging robotic bodies central to the main quest. Eventually the modifications allow you to build some insane stuff like a sentry bot with two flamethrowers for hands or a deathclaw-looking robot with sawblades to tear through your enemies.

While working through the DLC it felt really rewarding to pick up new parts to customize my own robots with, but at the end of the main quest you’ll find that every schematic is automatically unlocked. I found myself frustrated by this design decision because the joy of discovery was stripped away from the content. I mean sure, I could make whatever I wanted - but I didn’t feel like it was earned.

The nice thing about the robot customization is that Fallout doesn’t place limits on how much you can build, meaning that you can make as many robots as you have the parts for. These robots serve as companions however, so you can only bring one along with you at a time. They can occupy your settlements though, providing defense and functionality to anything you choose to assign them to which adds longevity to the entire system. I’ll admit, I’m looking forward to piecing together an entire settlement of robots myself.

It’s also worth mentioning that Automatron adds some great weaponry and armor to the game, including the [Tesla T-60 armor set]( http://fallout.wikia.com/wiki/Teslaarmor(Fallout_4) and my personal favorite, the salvaged assaultron head. Each piece fits along with the theme of the DLC and adds some unique goods to collect while you’re out destroying the robots of the Commonwealth.

As a package, Fallout 4’s first piece of downloadable content delivers a decent chunk of stuff to play with for its $10 price tag despite the short main questline and lackluster character development. While the main story isn’t anything to write home about, the robot customization system and pieces of gear are fantastic additions to the base game – adding more depth to an already intuitive crafting system. Automatron may not be the reason to pick up Fallout 4 again for everyone, but for fans of the series looking for a little more content it’s easily worth the $10 price tag.