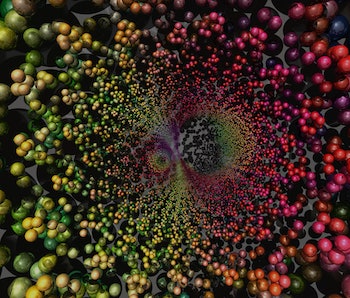 A team of geneticists led by famous, smart jerk J. Craig Venter made waves in 2010 when it created a completely synthetic bacteria. The team is back at it again with the human-made germ, but this time, genetically speaking, it’s trimmer — the artificial Mycoplasma mycoides genome is a paltry 473 genes. What’s even stranger is that the researchers don’t know what 149 of those genes do.

The single-celled organism “has a genome smaller than that of any autonomously replicating cell found in nature,” the largely California-based research group writes in the Science article, published today. (A parasitic bacteria that relies on host insects to reproduce has but 182 genes.) The researchers were clear this is not the smallest genome ever, but one possible minimal genome for the bacteria M. mycoides.

For the conditions the scientists demanded of the germ — living a fecund life in a glucose-rich petri dish — there was no extraneous genetic material. Thing is, the function of 32 percent of that material is a mystery.

Unknown genes were those that could not be reliably categorized with regard to a putative activity.

Thus, biological functions could not be assigned for the ~31% of the genes that were placed in the generic and unknown classes. Nevertheless, potential homologs for a number of these were found in diverse organisms. Many of these genes probably encode universal proteins whose functions are yet to be characterized.

That there are still genetic unknowns when we try to distill life to its most basic shouldn’t really come as a bombshell. Humans have thousands of genes, but of those, not all have an express input-output function. What was once known as “junk DNA” decades ago — DNA that doesn’t explicitly code for known proteins — has been cast in a new light, perhaps regulating other functions in subtle ways or providing important safeguards.

The bake-from-scratch organism isn’t just a scientific stunt, though some of the applications of synthetic biology still seem pretty far-out. As the Washington Post notes, Venter envisions that, were we to find an alien genome on Mars, we would just need the data rather than the biological material — akin to faxing the cell rather than sending it in the mail.