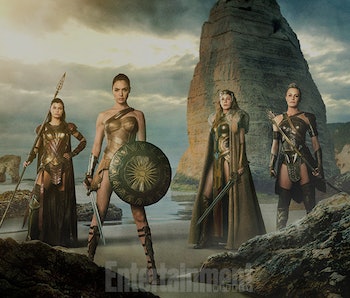 Although Batman v Superman has not quite lived up to its hype, the general consensus on Wonder Woman is strong. And it’s only getting stronger, thanks to some new photos of a Princess Diana (Gal Gadot) in her pre-Wonder Woman days alongside her band of warriors on the island of Themyscira.

Director Patty Jenkings told Entertainment Weekly about their outfits, “It’s total wish-fulfillment. I, as a woman, want Wonder Woman to be hot as hell, fight badass, and look great at the same time—the same way men want Superman to have huge pecs and an impractically big body.”

More like this
Entertainment
21 hours ago
House of the Dragon Episode 6 is the worst yet — for one specific reason
By Alex Welch
Entertainment
5 hours ago
17 years later, Star Wars finally returns to its most important planet
By Dais Johnston
Entertainment
4 hours ago
Andor Episode 4 Easter egg solves a classic early Star Wars mystery
By Ryan Britt
Share: