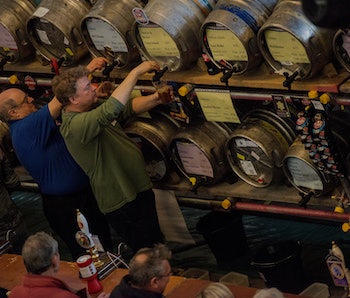 Were you left wanting more after you saw Star Wars: The Force Awakens? So were we. If it was beer you craved, then a brewing duo from Brooklyn has answered your prayers. There are plenty of home brewers in Brooklyn, but there is only Star Wars droid keg (that we know of).

Peter Farnsworth and Cody Harker are roommates in Brooklyn who recently began their own home-brewery Fool Me Twice. Brett Lambie provided the artistic vision to help turn a trash can into a beer droid for Fool Me Twice’s first brewing competition last month. Predictably, the public reaction was overwhelmingly positive. Presentation is not usually a cornerstone of brewing competitions, but the beer-dispensing droid added an extra layer of DIY creativity and made the whole thing better in the way only Star Wars can.

Inverse spoke with Peter about what went into making the droid, the competitions they’ve entered in thus far, and the exciting results of adding an artistic flare to an old tradition.

How did the idea for the Star Wars droid keg come to be?

Originally we entered into this competition to serve our home brew, which is beer we make from our apartment in NYC. We realized we needed some sort of vessel or container to hold our kegs. I found this trashcan which seemed to be the perfect size and so I brought it home and it fit in perfectly. I was looking at it and Cody and I figured out we could fit the top on it instead of just putting the keg in with an open top like some people do. Then we thought why don’t we install a professional tap on there as well? This tap I had on hand had this Star Wars lightsaber handle on it that I had 3D printed earlier in the year and it struck us both that this kind of looked like a Star Wars droid.

So you already had the lightsaber tap?

The lightsaber part was something I created back in November and that was just a fun DIY project that I did with my dad. We found a design for a Darth Vader light saber model and then we shrunk it down and put in the necessary fitting on the bottom so it would attach to our beer tap and then printed it and painted it to look somewhat like a lightsaber. As soon as we looked at it next to this trashcan it just clicked. This kind of looks like a combination of BB-8 and R2-D2 and I was like well I’m not talented enough to design this myself. So we called up our friend Brett who lives down the street, he’s the art guy. Brett works in production and the art department so he’s very artistic. He jumped on the idea immediately and came over. Granted this was the night before we had to serve our beer and we did this all in about six hours.

What was happening the next day?

This was on a Saturday night and on Sunday the next day was the final day of New York City Beer Week, which was a city wide event, but the final event was in Greenpoint at. So they held a home brew competition and there were about 25 different brews there and there were some professional brewers int he mix as well. We had been selected as one of those brewers based on a bottle we had submitted a month prior. And so we had to make it as quickly as possible. We went over to Home Depot and picked out some colors. We just wanted to avoid the BB-8 style exactly, we didn’t want to just rip it off. So Brett went and taped off some cool designs using some painters tape and we did one color at a time so we started with the orange and then some black.

How did you get that aged effect?

We had four different colors of dirt-looking spray paint and that was all Brett. He basically looked like a conductor of sorts going at it. He was like yeah let’s put in some blaster hits and some dirt from the sand. Originally our idea was to make it from the dark side because our beer was a dark saison, that’s what we had on tap. We named it FM-2.

How did it go the next day?

So the next day we showed up and lo and behold everybody else—minus one person who was a professional brewer—had their beer underneath their table in a bucket full of ice. And there was our droid on top of the table.

How did people react to you going that extra step? Were they mad at all?

Not at all. It’s such a welcoming community. We thought we might have gone over the top, because it was our first competition. But all the brewers who were there early were gawking at it and the public reaction was also stellar. So we were showing it off to people and explaining how it works. I think the droid had to do a lot with why we won but also it was a really good beer that was one of a kind.

So you got first place?

Yeah, we pulled it off.

Since then have you guys entered in more competitions?

Yeah since then we were accepted into another competition two weeks later at an event called Saison Day which was in Park Slope hosted by Allagash Brewing Company. We were one of the eight finalists and this was a different beer from last time but also a saison we had made. We brought the droid, and again we were the only people with presentation, but this was a free event so there were a lot more people. Our beer was a hit and basically there were official judges there from Allagash who were tasting in the backroom, and then there was the people’s choice. So everybody who came got a ticket and they could put their ticket in their favorite brewers little basket. We won that award. We emptied our keg after about 90 minutes and we were the first brewer to do it because our beer was really popular and word was spreading really quick.

Was it like the presentation was overshadowing the taste of the beer at all?

I think it was mutual. I think the droid attracted attention initially but then word spread and people were coming over saying they had been told to try ours. We got a weird phrase from a group of people saying “this is the rosé of beer” and I don’t know what that meant exactly. But it was popular for the taste as well because we brewed this one with a bunch of fresh herbs. I think for spring time that was a big hit for a lot of people because they were looking for a lighter beer.

How long have you been brewing?

Cody and I have been brewing for a year and a month probably.

How did you get into it?

My sister got me for Christmas two years ago lessons at a local home brew shop for how to learn beer. After that class my roommate and I sort of joined forces and started brewing our own beer. It was something I had read about and was kind of curious about and I think she picked up on that. I’m a beer drinker like anybody else but I wasn’t like an aficionado or anything like that.

Have you become one?

Yeah, I think since we started home brewing our love of beer has expanded greatly and we’ve been looking for unique beers and testing out new recipes. We’ve probably made about 18 batches since we started brewing. We make it for ourselves and for our friends. We have two beers on tap pretty much at all time and we always say it’s an open door policy if friends want to come over and drink our beer.

It sounds like you guys have opened the door for a completely separate competition for beer presentation.

Yeah absolutely. This has a lot of potential. We have a droid but it doesn’t have to stop there. We’ve discussed repainting the droid in a new color scheme or we talked about getting a different shaped can of some sort. But also there are plenty of ways you can go with it. The beer goes through all this cool looking sort of clear vinyl hose, you can come up with something that’s got all these winding hoses coming out of it and make it look like Doc Ock from Spiderman or something.

The fact that you guys just started is really impressive.

When we started home brewing we never thought we’d be competing against anybody, but here we are. Two competitions in we’re feeling pretty confident in our brewing capabilities.