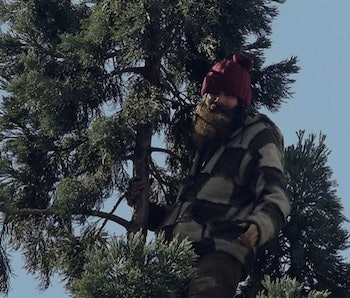 On Tuesday afternoon, a heavily-bearded man climbed an 80-foot Sequoia tree outside of the downtown Seattle Macy’s Store. At the top of the tree, he stopped, and refused to come down. Nine hours and several police negotiators later, he’s still in the tree. It’s all being live streamed here.

Along the way, The Man in the Tree has become an internet hero. Parody Twitter accounts for both The Man and The Tree sprang up, as #manintree shot up the trending list in over 14,000 tweets.

The Man is currently still in the tree, and appears to be settling in for the night on a set of curved branches. He hasn’t spoken to the police or to the press, so it’s not clear what his goals or motives were for climbing the tree.

Here’s a better look at The Man in his arboreal castle.

Though The Man was reportedly shouting obscenities and throwing pine (ahem, Sequoia) cones, Seattle PD was quick to assure residents that he probably did not pose an immediate threat from the top of the tree.

He also brought along botanical ammunition of his own.

According to The Seattle Times, The Man ripped off branches from the tree and threw them at the SPD negotiator, who caught most of them.

The police also proved completely unable to leaf the tree puns alone (and one Twitter user has spent most of the day doing the same).

After several hours and many failed negotiation attempts, The Man had an on-the-ground fan club as well.

After ripping off many of the branches in the top of the tree, The Man settled in, and the fire department apparently gave up.

Officers and ground crew are still on the scene, monitoring The Man’s arboreal adventure. He’s climbed halfway down the tree a couple times, reportedly to either pee or experience the rare mammalian feat of pooping out of a tree, but has always returned to his curved branches at the top of the tree.

As of 8 p.m. Pacific time, The Man was still in the tree, and even Seattle’s local superheroes were considering getting involved.

However funny the situation is, The Seattle Times reports the man may be a homeless person who residents say lives in the area. Police negotiators think he may be suffering from a mental illness.

“I think we’re more concerned about him getting out of the tree safely. And, if he needs any mental (health) help, to get that help for him,” Michaud said. “That’s our first concern.”

Police are still on the scene, and the man is still in the tree.

More like this
Innovation
6.25.2022 10:00 AM
9 veggies that are healthier cooked than raw
By Laura Brown and The Conversation
Entertainment
22 hours ago
You need to watch Christopher Nolan's most divisive superhero movie on Netflix ASAP
By David Grossman
Entertainment
20 hours ago
Does Thor 4 have a post-credits scene? Your spoiler-free guide
By Jake Kleinman
Related Tags
Share: