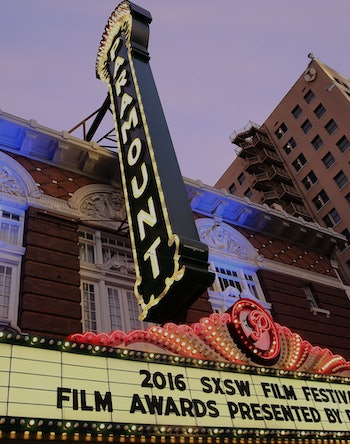 After nearly a week of intense movie geekery, the 2016 SXSW Film Festival has come to a close, and we’re still recovering; the whole SXSW experience can be extremely overwhelming. Getting dropped in the middle of Texas with thousands of other like-minded film fans with the opportunity to see hundreds of different movies, panels, and discussions can be daunting. But it can also be fun as hell, if you know how to do it right. So if you’re going to head to the 2017 fest as a first-timer, here are a survival few tips — for 2018 and beyond.

1. Get the SXXpress passes for the movies you definitely want to see.

First, consult the schedule, and make a long list of the movies that you want to see. Then book it to the registration area at the Austin Convention Center to grab some highly coveted express passes, so you’ll be able to skip the regular line to get to screenings a little later while still getting first dibs on seats. Even if it’s a little later in the day, keep an eye out on what SXXpress passes are still available throughout the day.

The startup CEOs there for the Interactive portion of the festival have it easy: go to panels from 9 to 5 and then get wasted at night. If you’re there for the film festival, you’ll be spending a lot of time in the theater, but no doubt that you’ll be tempted by the amount of official and unofficial parties being hosted around town. Whether it’s a SXSW bash sponsored by some posturing corporation or a small industry get together, try to knock back a few beers at parties. It’ll let you easily network, and you can blow off some much needed steam.

Express pass or not, you’re going to have to wait on long lines. It’s something that’s easy to forget as you pack your schedule all tight with back-to-back screenings, and the selective memory results in you spending half your time slowly frying in the impossibly hot Austin sun. Fill up on podcasts or throw a few albums on your phone to pass the time, or, you know, you could also try to make friends in line. Regardless of whether you think you’re a mile away and will never ever get into the screening, don’t panic. The festival’s main venue, the Paramount Theater, holds at least 1,200 people, so the line may be all the way around the block, but you’ll most likely get in.

4. Don’t be afraid to go to movies that have distribution.

Be an equal opportunity moviegoer. Part of the charm of SXSW is that you’ll get to see a wide variety of movies that no one else has seen before — and we’re not just talking about premieres. Indie films without theater distribution are the meat and potatoes of the Film festival, and some of them become outright classics once critics separate them from the pack. It’s that mentality that discourages people from seeing movies with distribution already, like Richard Linklater’s Everybody Wants Some, Jeff Nichols’ Midnight Special, or Chad Hartigan’s Morris From America. Just because they have a studio logo in front of them doesn’t mean you’re a sellout if you line up for them. On the contrary, studio movies at SXSW are probably the best and weirdest that Hollywood has to offer.

5. Go to the “Midnighters” even if you’re too tired.

Don’t let anybody say otherwise: watching movies all day is hard, and you’re brave for doing it. By the time you get out of a screening at 10pm, you’re probably going to be desperate for bed, but resist the urge. There’s still plenty of movies to be seen at midnight or later, and chances are they’ll be unlike anything you’ve ever seen. Blumhouse’s new horror movie Hush premiered at midnight at this year’s SXSW, and so did J.J. Abrams’ restoration of writer/director Don Coscarelli’s 1979 weird-out Phantasm.

Your packed schedule and the fact that you forgot to factor in long lines will probably force you to book it from venue to venue, but do try to stay for a few Q&As. SXSW usually invites the filmmakers and talent involved, and it’s such a laid back atmosphere that they stick around to answer questions for at least a half hour or more after the movie ends. You might have to drop a few movies from your schedule, but at least you’ll be able to see some of your favorite filmmakers talk about what you just saw.

Stars are human beings too, and SXSW cultivates an a creative atmosphere that usually weeds out the actors or filmmakers with too much of an ego to hang out around town. Whether it’s in the lobby of the Four Seasons, or strolling around the Convention Center, or waiting in line for Franklin BBQ you’re probably going to see someone from your TV or movie screen standing right next to you. Talk to them! Say how much you enjoy their work! Just don’t freak out, you might spill BBQ sauce all over yourself, and that’d be embarrassing.

8. Set an unofficial work spot if you don’t have one.

Some people at SXSW are there to work as well as to take in the festivities. Even if you’re there to work you might forget that little detail while having too much fun. If you’re into having a routine (not to mention a quiet place to get stuff done) try to post up at a specific place you know will be free from distractions. Wifi is ubiquitous throughout SXSW, so don’t worry about an internet connection. You can find a little nook in the Convention Center somewhere, or stroll into the lobby lounges of any number of the hotels in downtown Austin. To get throwback fancy, try the Driskill. To stay efficient, try the dual Residence Inn and Courtyard Marriott right across the street from the Convention center.

Sorry, we couldn’t get over that mention of BBQ. Austin is a town known for live music, but it’s also a town where you should eat as much as possible. The dingiest most disgusting-looking places in town are still probably better than your city’s best eating spot, so the possibilities are endless. Brisket anywhere is a must, but don’t deny yourself the pleasure of the city’s vast amounts of taco eateries. And for the love of all things that are holy, do yourself a favor and get a chocolate chip cookie shake at the Alamo Drafthouse.